The hottest sports drink in athletic rings is red, frothy, and tastes like dirt. Beet juice (or beetroot juice) has gained popularity in the last five years, especially among Olympians, Tour de France cyclists, and professional athletes. What’s all the hype about? Let’s dig in and figure out if Beet Juice Boosts Athletic Performance, and if it could be your next competitive edge.

Beets contain a large amount of inorganic nitrates. These compounds are the precursor to a very important signaling molecule that our body’s need to function – Nitric Oxide. Nitric oxide has a variety of functions in the body, including those related to blood flow, muscle contraction, and neurotransmission.

Andy Jones, a professor at the University of Exeter in the UK, is one key researcher on beet juice and its effects on athletes. According to Jones, there are two major changes that beet juice makes in the body. “The first is that it causes blood vessels to dilate, so you can provide more blood through them,” he says. “Simultaneously, it seems to make the mitochondria more efficient, so they are able to create the same energy while consuming less oxygen. So you really have two things happening. Lower oxygen cost because the mitochondria are more efficient, and then you have a higher oxygen supply—in terms of performance, that’s a pretty good combination.”

The protocol that has been studied the most by sports scientists is one conducted by Andy Jones and his group of researchers. The optimal level in their study was two concentrated shots that are equivalent to about 600 mL of juice (300mg of nitrates).

Beet juice was consumed 2 to 3 hours prior to exercise. Peak levels of nitrate diminished around 12 hours, as you can see below.

In regards to performance, there was a decrease in oxygen consumption by about 3% from the highest dose (280 ml of concentrated beetroot juice or 16.8 mmol of nitrate). The amount of oxygen required to maintain a given level of moderate exercise decreased after taking beet juice; in other words, it took less energy to cycle at the same pace.

They also did a cycle test to exhaustion; here are those results: 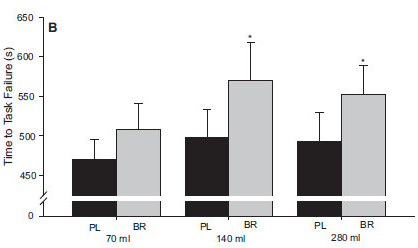 It is clear from the research that beet juice has a positive effect on endurance and blood pressure.

Effects for the Average Joe

One interesting result of Andy Jones’ research is that beet juice boosts athletic performance for regular athletes more than professional athletes. “If you think of the things beet juice helps with, like blood flow and mitochondrial function, in elite athletes, those abilities are pretty well developed,” says Jones. “So there, you do have an issue of diminishing returns—any ergogenic aid might have a smaller benefit in the elite. But even if the benefit is just 0.1 of a percent, it’s probably worth trying.” In this case, regular athletes like you and me may gain more than an Olympian.

Eat Beets or Drink the Juice?

In many cases, it’s best to eat the whole food to get all of the nutrients and fiber. But with beets, you are better off juicing the beets for maximum benefit. There are two reasons for this:

The first reason is that by cooking/fermenting the beets (pickled beets), some of the healthful nutrients are decreased. By juicing, you’re able to get 100% of the phytonutrients that help decrease blood pressure and enhance performance.

The second reason is that juice is more nutrient dense than consuming the individual beet itself, meaning you would have to eat several beets as opposed to drinking 1 glass of beet juice.

So Give it a Try

Are beets going to make you an elite athlete all by themselves? Of course not. But there is solid evidence to support that beet juice boosts athletic performance and endurance, which may be enough to provide that winning boost.

Researched has pegged gains from beetroot juice at around 3 percent. The benefits are best established for events that last from 5 to 30 minutes. The data on endurance events over 30 minutes isn’t clear, but there’s no harm to performance with standard doses. So feel free to try it and track your response.

It’s best to consume beet juice between 2 and 2.5 hours before the event so that nitrate levels are spiked when the event begins. I also recommend that you do not try something new on the day of a race.

How Much Beet Juice

Most research has been done with the equivalent of 500-600 mL of beetroot juice. This can be in the form of regular juice, while some athletes have started to turn to concentrated beet juice, which provides the same amount of nitrate with less bulk in the stomach. From a dietary standpoint, beet juice is a potent detoxifier, so it’s best to start with a small amount and work your way up.

The dark carotenes of beets may give your urine and stool a pink/red color. The color change is harmless.

Have you used beet juice? What were your results? Do you think beet juice boosts athletic performance? Experiment in your own training to see what works for you and post your comments here.

Sources For This Article Include: