Which Came First, Health or Wealth?

Thinking about the topic of health and money is similar to the question: “What came first, the chicken or the egg?” 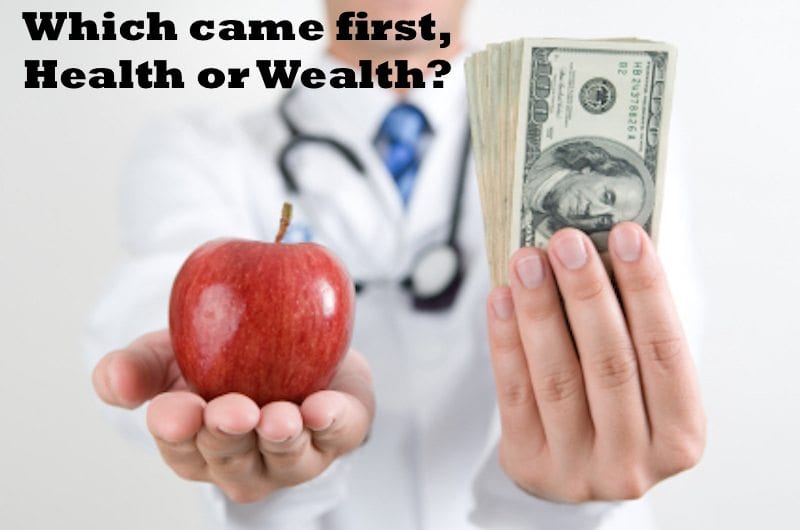 Many people literally focus on building a life for themselves at the expense of their health. Then, after the career, family, company and financial freedom is in place, they pick up the pieces and start trying to lose weight, get fit, lower their blood pressure, spend money on the best doctors…the list goes on. Retroactively trying to take care of their health is difficult and expensive, to say the least. Now there is damage to their bodies that will haunt them for the rest of their lives. So why did they wait?

I had this client I worked with who had built an unbelievable company and was wealthy by anyone’s standards. This gentleman is on a plane 3-4 days a week, meeting with clients on his days off, and stressed out of his mind. But he has got it made; he owns several homes all over the country and lives “the good life”.

When we had met (totally by chance), he started picking my brain about what I do. I answered some simple questions about my thoughts on heart health. As the conversation went on, he started to open up and really pour it on me. To sum it up, he was in his 50’s and told me he thought he was going to die. His doctor had reun tests, and they came back clear but something was wrong, he said. He actually made his doctor continue to run tests because he was so positive that his heart was on the brink of failure. That’s when he started working with me. Needless to say, my tests didn’t come back clear; he was a mess.

So why did this gentleman wait so long? He built a huge company at the expense of his health, and when he finally reached a point where he could reap the benefits, he stated, he thought he would die soon. I’d like to single him out but this happens all too often.

Why? Why do people put their health on the backburner in the endless pursuit of wealth? Simple – it is easy to focus on everything but your health.

I get it. I know what it’s like. There are only so many hours in the day, and putting off the gym (or insert your vice of choice) is easy in the face of everything else that must be done. I have a family and multiple businesses; I understand that life happens. When I come to the realization that I haven’t had a good night sleep in about 2 weeks, that I’ve missed my workouts, grabbed whatever I could find to eat, I know it’s time to think about a intervention. There was a time in my life where this was happening all too often. Now, I catch this immediately and start asking myself better questions:

Now, I’m not going to make unreasonable claims, stating that if you’re in the perfect state of health, you’ll make a million dollars this year. However, I’m going to tell you that taking care of your engine/body will allow you to accomplish much more.

It’s why Ramit invests $50K+ a year on a personal trainer, a natural health doctor and other tools to keep him focused and committed on his goals (noticed I used the term invest… because that’s what it is, an investment!).

If you’re serious, sometimes you need to go all in. Not because it’s required, but more because it’s what’s going to set you up for the highest likelihood of a positive income.

80% of the American workforce has a chronic disease (55% of them have two or more chronic illnesses). This leads them to take sick days. But even when they are present at work, the employees have lost productivity due to their chronic illnesses.

By decreasing chronic inflammation in the body:

In short, your whole persona will be enhanced!

If you want to out-perform your competition, then you have to be able to show up to work fresh and ready. When you’ve decreased inflammation in your body, you’re sleeping more efficiently, waking up refreshed, sustained by proper fuel/nutrition, thinking clearly and overall better equipped to conquer the tasks at hand.

Which comes first, health or wealth? Which ever side of the spectrum you’re on, decreasing inflammation is crucial for a compelling future.