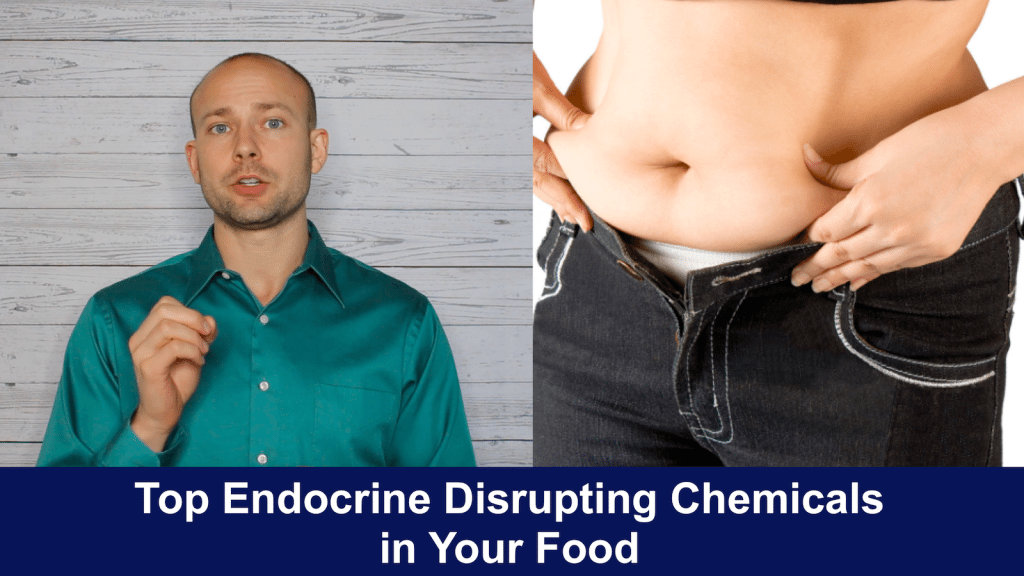 Many people start new diets yet have the complete inability to lose weight because their hormones are out of control. You see, there are hormones that tell your body to burn fat for energy. If they are not being heard (due to toxicity), then you can’t lose weight, even with the best exercise program in the world.

Thyroid issues cannot be solved or reversed naturally when your eating chemically-laden food or if you are suffering from toxicity. I’m sure that (like me) you know many people suffering from thyroid issues. The information mentioned in this video is at the core or root cause of many thyroid problems.

For more details on removing toxins from your life, check out this article.

Hi I’m Dr. Zyrowski from NuVisionExcel.com and in this video we’re gonna be talking about the top endocrine disrupting chemicals that are in your food. Whether you’re going to the grocery store and getting fresh fruits and vegetables or you’re getting packaged foods there’s so many different chemicals that are found in our foods today that are disrupting normal bodily function as you know it.

Now an endocrine disruptor is anything that or I should say any pollutant that interrupts normal biological pathways within an organism that organism being your body and those pathways being anything from hormonal proper hormonal function to proper digestion. Food today is loaded with pollutants and it’s so important to be able to identify the different pollutants that are in the different foods and which foods you should always stay away from so let’s go ahead and dive into which foods you need to stay away from and which chemicals to look for in order to make sure that you are avoiding the endocrine disruptors that are just so prevalent in today’s food supply.

Number one on our list is going to be soy. Whenever possible stay away from soy and the reason for that is because 90 plus percent of soy is GMO.  The other reason that you really want to stay away from soy is because it’s what’s known as a phytoestrogen. It mimics estrogen in our body and it can lead to estrogen dominance. Now many different poor quality products on the market have soy but even some that are perceived to be high quality products contain soy as well so we need to make sure that we’re staying away from nutritional supplements and in different food products that are high in soy and if you have little ones at home you need to make sure that you’re checking the baby formulas because a major ingredient in most baby formulas is in fact soy. The only time soy is acceptable is when it’s organic and fermented. So, unless you’re consuming organic fermented soy don’t consume soy at all.

The next thing that we need to talk about is vegetable oil. The reason that you need to stay away from vegetable oil is because it’s made from all GMO crops. So things such as corn soy and canola and when these different crops are GMO not only do they have some issues we’ll talk about in a second here but you know vegetable oils consider to be a bad oil and when you’re consuming these different bad fats what they’re doing is they’re actually attaching to our cell membrane they’re are getting into our nervous system and they’re becoming part of self and that’s when you start to have a bunch of dysfunctions. So you need to make sure that you’re sticking to high quality fats such as coconut oil or olive oil.

So the third topic on our list of endocrine disrupting chemicals in foods to avoid is going to be GMOs and the reason that you want to stay away from GMOs is because it’s an altered it’s a crop that has an altered state from the way that it was originally designed to be. So what they’re doing is they’re taking things such as pesticides and viruses and are actually lacing it right into the DNA of the different crops out there. Corn is a major one that has this issue. Wheat is another major one that has this issue you know this is why so many people are having sensitivities to gluten today and having problems eating wheat and having reactions to corn. So we need to make sure that we’re staying away from these different GMO crops so whenever you go to buy either fruits or vegetables make sure you’re staying away from the GMOs, okay.

The other thing that we need to talk about when we’re having this discussion of eating fruits and vegetables is to make sure that you’re staying away from foods that are sprayed with the different pesticides. There’s one out there called organophosphate pesticide you know these different pesticides are actually designed to destroy the nervous system of bugs and that’s you know ultimately why we get these beautiful crops at the store I mean yes they look beautiful but if they’re toxic then they aren’t gonna do us a whole lot of good and if they are going in and destroying and killing the bug by destroying their nervous system then it’s gonna have an effect on us. As a matter of fact when some of these different pesticides were brought in to other countries around the world just small tribes that were actually not just they were just using regular natural farming methods and they brought some of these pesticides in and what happened is their neurological disorders not only in their young but also their elderly just increased and skyrocketed so we want to make sure that when we’re buying fruits and vegetables we’re making sure that we’re either buying them from a source that we can trust or buying them organic because we do not want pesticides and chemicals on the food that we’re eating.

The next big food that you need to stay away from is conventional dairy because the conventional dairy that you’re buying from the grocery store is loaded with all kinds of different toxins. Matter of fact there was a study done where they found over 22 different chemicals in conventional dairy milk. So you need make sure that you’re sticking to the grass-fed dairy with pasture raised cows in order to avoid things such as growth hormones, antibiotics, steroids, and all the things that were given to these different cows over the years in order to make them produce a huge amount of milk because when they’re given to the animal that’s actually producing the product that you’re consuming you are gonna consume those different chemicals as well.

The last food that we’re gonna talk about today is gonna be artificial sweeteners. You need to really make sure you’re watching those artificial sweeteners. They’re in many foods today and they’re also in a lot of sodas and most people think that they’re doing themselves a huge favor by consuming the artificial sweeteners because it says zero calories as a matter of fact it’s causing so many neurological disorders, disrupting brain function but it also is disrupting hormones and as well in a process called pregnenolone steal where it goes and it alters the conversion of cholesterol to hormones so make sure you’re staying away from artificial sweeteners and as a matter of fact make sure you’re staying away from sugar as well because what we’re finding and there’s so much science coming out that sugar is absolutely just destroying the human body and causing a complete degeneration not only of our nervous system but our musculoskeletal system so you need to really avoid the sugar as much as possible.

Now the last thing we’re going to talk about is gonna be water. Now I understand water is not a food however it’s something that people are consuming every day that is loaded with toxins it always surprises me how many people go to the faucet or go to the tap with no concern of whether or not the water has chemicals in it or how often you go to a restaurant they just serve you plain old tap water even nice restaurants right. And so when we look at the water it in many cases it has arsenic in it has LED in it. It has it has a fluoride in it; chlorine in it. So we need to make sure that we’re good drinking good pure water all these different chemicals that I just mentioned are neurotoxins and they will affect our body.

You know as a matter of fact in the different fishing communities what they found is that some of these different fish not only do they have do they have many of these items these chemicals I had already mentioned but they finding that they have pharmaceuticals in them they’re finding fish with Ritalin in them they’re finding fish with estrogen dominance in them due to so many women taking birth control so make sure that you’re getting good clean water make sure that you are getting the water tested in your home so that you’re not getting all these impurities.

I hope you enjoyed this information in that it really gave you a lot of knowledge in  order to make sure that you are staying healthy and not eating things and consuming products that are disrupting your endocrine system. Don’t forget to give this video a thumbs up and also subscribe to my channel and if you have any questions as always make sure you drop them below in the comments section. Thank you and make it a great day.

Dr. Zyrowski's Top Choices For Detoxing The Body At A Cellular Level. Regain Your Health Today