[VIDEO] The Key to Weight Loss

The Key To Weight Loss  is a video that breaks down the science of weight loss to help you understand why you struggle to lose weight. 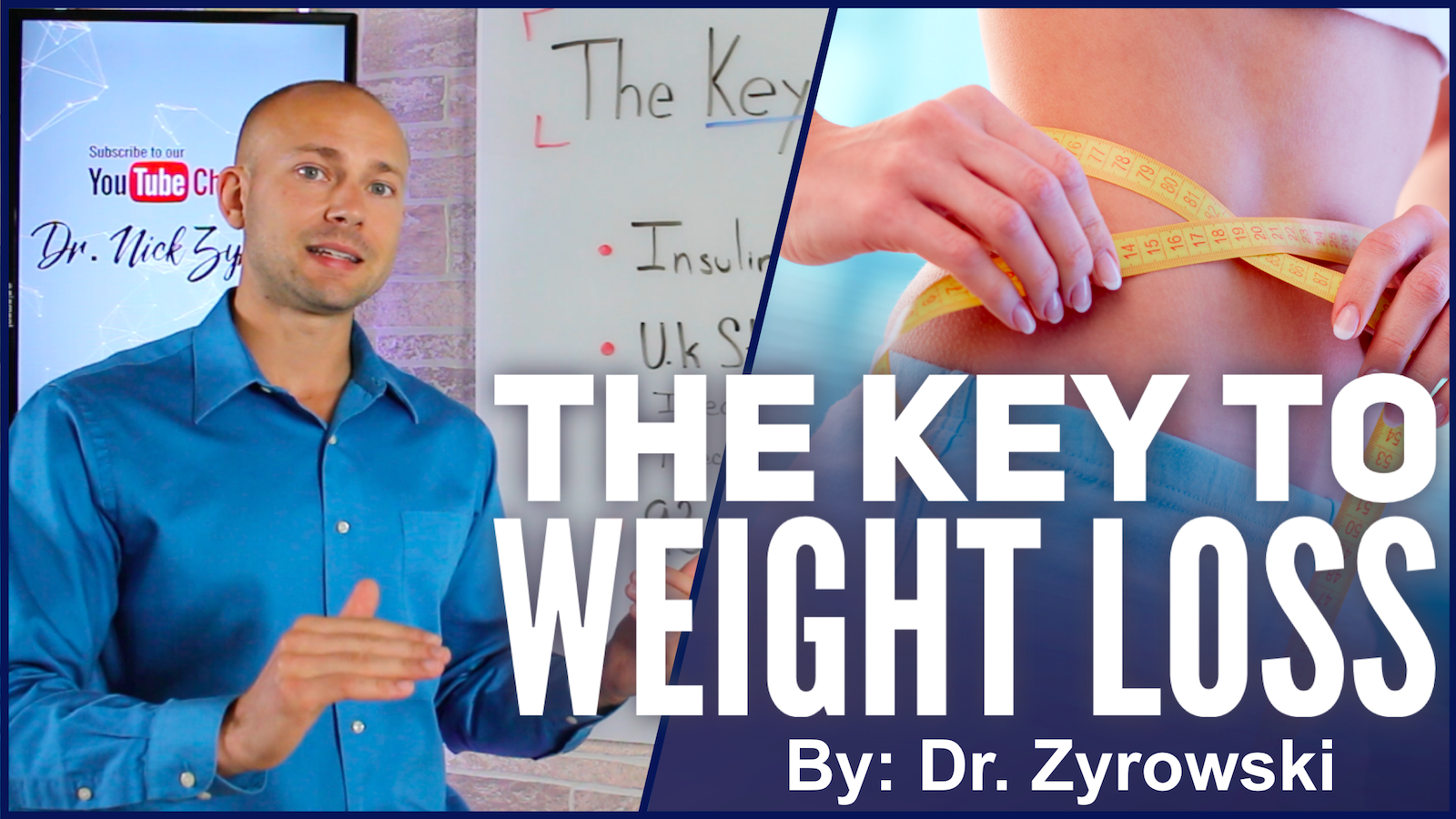 Weight loss is an industry that offers big profit so many people are enamored by fancy diets and weight loss systems that typically mislead them and set them up for failure.

Weight loss is about hormones and once you can control the hormone insulin, you can lose weight.

Insulin is the key hormone to watch when it comes to weight loss. Whichever direction insulin flows weight loss goes. If insulin is low, then weight loss will occur. When insulin is high, you will gain weight. Multiple landmark studies show us this again and again. The evidence and science of weight loss cannot be any more clear that if you want to lose weight you must get insulin under control.

Losing weight is about balancing insulin. The question then arises, how do I balance insulin? The first strategy is to implement intermittent fasting. This is a very powerful technique that forces insulin to drop and stay low. The next strategy is to cut out all refined carbohydrates and sugar. When you are focused on weight loss you must cut out even the natural sugars in order to get insulin to drop. This is why the ketosis diet is so effective and that is because it forces insulin to stay very low.

Lastly, eat a diet that is high in fat, moderate in carbohydrates, and low in carbohydrates. Here is the diet we follow to achieve this state where we are keeping insulin low and burning fat.

Here is how you can get a digital version of the cookbook and diet guide my wife and I wrote.

[Video Transcription] The Key To Weight Loss | What You Must Know

In this video I’m going to teach you the key to weight loss.

Hi, I’m Dr. Zyrowski with NuVisionExcel.com. If you’re new to the channel, it’s such a pleasure to have you here. Be sure to subscribe. Hit that little bell notification to join our notification community. I’m going to help you excel you health and your life.

In this video, we’re talking about the key to weight loss. You know if you’re one of those people that seems that you know no matter how much you exercise or how little food you eat, you can’t seem to lose weight, and as a matter of fact, just the mere sight of food, you feel like you’re starting to gain weight. Well first of all you’re not alone, and as a matter of fact, it may not be your fault.

What it has to do with is a little hormone called insulin. Now what insulin is is a hormone that’s created by the pancreas, and it shuttles blood sugar into the cells so that it can be used for energy. Now what was found unanimously across several studies when insulin is raised weight gain followed, and when insulin was lowered, then weight loss had followed that. So what I’ll do is kind of show you a couple of these studies and show you the the hormone cascade that happens here that causes you to gain weight when insulin levels are high.

So first, let’s go to the United Kingdom. Back in 2007, what they did is they took did this study where they took a group of patients, and they gave them insulin injections. And then they took another group, and they gave them a medication that would increase the secretion of insulin in the body. So what they found is that they were taking these diabetic patients, they were raising insulin, they were so you know as a result blood sugar had balanced out. But what also happened is because they raised that insulin, the patients that got the injections had a nine pound weight gain, and then the patients that took the medication that increased insulin secretion had a 6.8 pound weight gain. So as a result of increasing insulin, what happened weight gain followed.

Now let’s go ahead and take another study going back to 1993. What they did is they took a group of diabetics in over a six month period of time. They gave them a hundred units of insulin. Okay, so over that six month period of time, the other thing that they did is they cut their calories by 300 calories. And so in the increased insulin but decreased food intake decreased calories, as a result the average patient gained 19 pounds.

Now adversely what happens in type 1 diabetics is that they have an autoimmune condition that breaks down the beta cells on the pancreas. As a result of that their body’s not able to produce insulin, and so their insulin levels are very, very low. And so what happens for them is they have a absolute increase in a ton of weight loss, and they actually have so much weight loss that their body starts wasting away. And so you know you can see here as we have all these different ways that we’re raising insulin that weight gains following and as we are having conditions that are decreasing insulin in a huge way the body just starts shedding weight like crazy.

Taking you out of the realm of diabetics, you look at somebody who actually has a tumor that secretes insulin. What happens is that this person starts to gain weight. And as soon as that tumor is removed and in that whole issue is taken care of, the insulin levels drop back down in weight also drops as well.

Now here’s where things get a little bit dicey. When insulin is chronically raised, it drives chronic inflammation. The other thing that it does is it down regulates cell receptors. And when insulin is chronically raised the other thing or hormone that is chronically raised is leptin. Now leptin is the hormone that tells your body you’re full. It tells your brain you’re full. So you’re eating your meal, leptin spikes, and it says “Hey, we’re full stop eating.” So what happens in people who become leptin resistant, essentially what happens is they can’t hear that hormone, and then they are not told, their brain is not told to stop eating. So as a result of that you overeat.

So what I want to do is come over here and teach you how you can actually balance insulin levels in decrease insulin levels and body, so that you can not only lose weight, but also live a better life. Because we know that the more weight that you carry around the more prone you are to chronic disease and that the chances of developing chronic diseases and chronic inflammation is way up when you’re carrying that excess weight.

So the first strategy that I want to talk about is intermittent fasting. Okay.  Intermittent fasting is fasting for sixteen hours and eating all your meals within an eight hour period. So ideally what we’re basically doing here is we’re skipping breakfast, okay. We’re having a nice lunch and a nice dinner. Ideally here the other thing that we want to do is we want to make sure that we’re not snacking in between meals. Because while we’re going in that 16 hour fasted state, it’s going to really bring down those insulin levels. And then we’ll have our first meal, and in a healthy individual, those insulin levels will drop back down.

The next thing is we need to remove sugar. So you know you might be thinking just all the sugar that you would add to your food, but we not only want to watch out for that sugar, but we want to watch out for too much natural sugar. So sugar like honey, sugar like maple syrup, sugars that are typically acceptable in like a Paleo diet, are not going to be acceptable if you’re trying to lose weight and you’re trying to keep your insulin levels low. So not only do we need to watch out for sugary beverages, but we also need to really watch out for natural sugars in excess. And also we want to watch out for those sugars that are added to almost all the foods that we’re buying in the store that are keeping you addicted to them. So whether it’s canned tomatoes, ketchup or even yogurt really watch for those different sugars that are added, and those sugars coming over 50 different names. Most of them end in -ose. So like fructose, sucrose most of them end in -ose and if they don’t end in -ose, typically they’ll have the word sugar in them like cane sugar.

Now the next thing that we want to do here is really watch our diet, and one of the things that we can do to really support balancing insulin levels is eat more fat. So increase our good fat content. Fat is one of the foods that raises insulin the least. And so if we want to keep our insulin levels low, we want to make sure that we’re increasing fat, and this is why people who follow a ketosis diet they find that they have such good results with weight loss, keeping insulin levels low, keeping hormones balanced, and as a result, as I said losing weight.

Next thing we have to keep the protein moderate. Okay. If you’re eating protein in excess, it’s breaking down into sugar in the body. We should be somewhere around a 30% range of our macronutrient protein intake, okay. So we’re thinking 60% here, 30% here, and 10% at the carbs. Now remember when it comes to carbs, we always are looking for nutrient dense carbs like a sweet potato and not the refined carbohydrates like white bread. And we don’t want to consume any carbs in excess because it’s going to raise those insulin levels.

So here’s the deal guys, if you want to learn more about how to eat for weight loss, go ahead and check out my video because I did a video on that specific topic that breaks down this category on food a little bit more. So ladies and gentlemen if you want to lose weight, it ultimately comes down to this hormone called insulin. It is the key to weight loss. So implement these strategies right here, and you’re gonna find that you are able to bring those insulin levels down and see great results.

Be sure to subscribe to the channel, give this video a thumbs up, share it with your friends, and if you have any questions, post them in the comment section below.  I’ll get back to you. Other than that check out my videos over here on apple cider vinegar and fasting and weight loss, and then I’ll see you guys in the next video.