We have all heard the phrases:
“The early bird gets the worm.”
“Early to bed, early to rise, makes a man healthy, wealthy and wise.”
“Early to bed, early to rise, work like hell and advertise.” (Ted Turner’s version)
So, according to these proverbial phrases, it would seem that people who go to bed early are more likely to be successful. Like many old wives tales, these sayings are scientifically true. Read further to learn why exactly it’s beneficial to be a part of the early bird club. 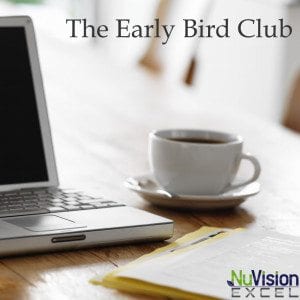 The University of North Texas found that students who were early risers earned higher grades. In fact, the students who woke up early reportedly earned a full grade point higher GPA scores than their night owl classmates.

In an article published by the Journal of Applied Social Psychology, early birds are more productive and will often do much better in business. What they found is individuals who wake up early are better able to anticipate problems and effectively deal with issues when they arise.

Harvard Business Review also weighs in on this topic. Harvard Business points out that night owls are out of sync with corporate schedules, making them miss out on critical opportunities. Being at the right place, at the right time can play a crucial role in one’s career.

Who’s Who
There are many high-level individuals that pride themselves on how early they get up, or even how little they sleep. There are certainly part of the early bird club. For example, Donald Trump credits his success, in part, to the fact that he only sleeps three to four hours a night. Marissa Mayer, the CEO of Yahoo, says she only gets four to six hours of sleep each night.

Though being an “early bird” can be a game changer for many, I’m certainly not suggesting you become an early riser and sacrifice your overall duration of sleep. Donald Trump and Marissa Meyer are probably sacrificing something in another area of their life due to the lack of rest. For instance, studies show that a lack of sleep will:
• Drive inflammation (the root cause of disease)
• Cause creativity and memory issues
• Causes brain cell regeneration to not occur
• Drives toxicity within the body

I think you get the point that, although it is good for many reasons to get up early, you don’t want to sacrifice sleep duration.

What I do & How to Do It
I’m also a member of the early v=bird club. I personally enjoy getting up early. First, it gives me an amazing sense of accomplishment when I knock out major tasks for the day by 9:00 a.m. Another primary reason I wake before the sun is because I can get up while the world rests and immerse myself in important projects before my cell phone rings, my kids need me, and before all of the world’s distractions start banging at my door.

If you would like to become an early riser, it is easy to do. You might have to throw out that notion that, “I am not a morning person,” and be willing to try something new. You can do it! You can be a part of the early bird club!

1. Go to bed and wake up 15 minutes earlier every day. Each 15-minute increment deserves three to five days to allow your body to adapt. Continue moving your schedule back 15 minutes until you reach your desired wake time.

2. Have a plan that excites you to get out of bed the next day. Don’t just get up early and sit around. Have a project or a new business concept, or even a great book that you are excited to conquer when you jump out of bed. I love what I do, and you should too. Find the passion in your life.

3. Put your alarm clock out of reach. I know all too well how easy it is to slap that “off” button and not even realize you did it until you wake up 45 minutes later (oops). With kids (and sometimes a lack of quality sleep), this can become a bad habit. If your alarm is out of reach, then you must get up by force.

If you have tips on joining the early bird club or stories on how becoming an early bird has changed your life, please share in the comments below.