Many of the clients I work with report that they have sleep apnea. If you are one of the millions who are seeking a natural solution, you’ll want to watch this video where I share some of the best ways to support reversing sleep apnea. 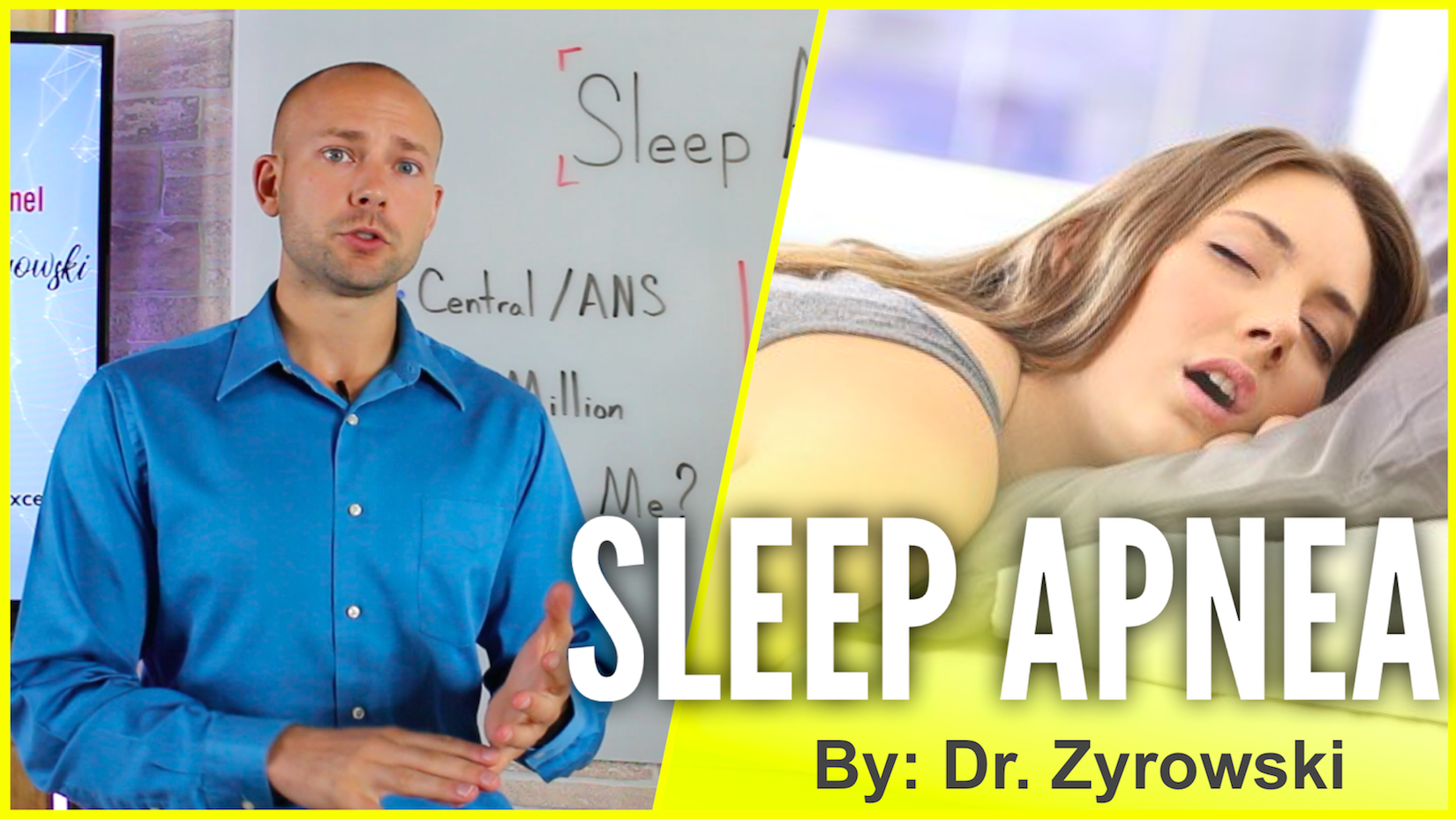 The autonomic nervous system (ANS) is what controls unconscious functions in the body. These functions include things such as  your heart beating and your lungs breathing. When this part of the nervous system becomes fatigued, the individual suffers with improper function of the ANS.

The way you can do a sleep apnea test is by using the Biostrap device (save 15% with code “NuVision”). Now don’t get me wrong, I do believe doing the sleep apnea test in a clinical setting will give you the most accurate results. However, using the Biostrap device to look at oxygen saturation levels, breaths per minute, and heart rate all combined with your overall sleep patterns is very powerful. This kind of information is almost unheard of being able to be found anywhere other than a clinical setting.

The sleep apnea cure can be very complicated. Many people try to say it’s just one change or one nutrient that you need to take in order to cure sleep apnea. However, the truth is that everyone reacts differently and you may need a multitude of different nutrients and support in order to get the results you are looking for.

Antioxidants, N-Acetyl-Cystine, fat soluble vitamins, minerals, and ribonucleic acid are all important when it comes to improving ones health and reversing sleep apnea. It is also important to make sure that you are following a healthy diet and lose weight, if that is an area of concern for you. Sleep apnea nutritional deficiency should certainly be at the forefront of the list of things to resolve.

You want the best Top Sleep Strategies Unlocked to you? You may also want to listen to my popular podcast about sleep here http://tinyurl.com/p6ubeu5.

In this video you’ll discover a nutritional approach to sleep apnea.

Hi, I’m Dr. Zyrowski from NuVision Excel.com. If you’re new to the channel it’s a pleasure to have you here, be sure to subscribe, hit that bell notification, join our notification community, and I’m going to help you excel your health and your life.

In this video we’re talking about Sleep Apnea. This is a big problem that many people suffer from, essentially where people stop breathing for short periods of time at night and they typically wake up taking a big gasp of air. Now this is a problem, not only because it’s going to leave you completely fatigued all the time, but it’s a problem because it’s known to lead to further health conditions down the road and if you have sleep apnea you’re definitely going to want to pay attention.

Now, when we look at sleep apnea there’s two types. There’s going to be obstructive and there’s going to be central. Let’s go ahead and focus on central first. Now Central Sleep Apnea is a type of sleep apnea that is affecting the central nervous system specifically the autonomic nervous system and what that is referring to is the part of the nervous system that is in charge of unconscious control, all the things, all the functions in your body that you’re not consciously controlling; your heartbeat, your digestion, your lungs breathing and when we look at central sleep apnea, what I look at is as, is a complete fatigue or a complete dysfunction of that central nervous system and as a result of the autonomic nervous system not functioning well, you have a hard time breathing.

Now here’s the thing, when we look at central, all of the things we are going to talk about are just known to help this in such an incredible way. But, when we look at obstructive sleep apnea, it also helps with that too and not because it’s removing any sort of obstruction but simply because many people in the bulk of diagnosis is leaned toward the obstructive sleep apnea and when they use these same methods, just to give it a try, just a shot in the dark, they seem to get well as well. What this essentially means once again, it’s not removing any of the obstruction, but that these people were improperly diagnosed with this and that these methods are getting them well because they have a problem with the autonomic nervous system.

Now, it’s estimated that 22 million people suffer from this issue and I can tell you clinically, I was totally blown away when I found out how many of my patients actually are sleeping with CPAP machines and have sleep apnea. We always turn to these methods right here in order to get them well. Now, you may ask yourself “is this me, is this something that I’m suffering from?” Maybe your sleep is really terrible, and you’d like to get some further information on this.

Now, one of the things that I use with people, something called the Bio-Strap. I’m actually wearing one right here on my wrist and what this is, is a smart device that can give you a clinical grade analysis of what’s going on in your body. Now it’s very, very informative because what it’ll do is give you blood oxygen saturation rates, it’ll give you respiratory rates, it’ll also look at your heart rate and then will give you a full sleep analysis and you can take all this information and you can get a pretty darn good idea as to whether or not sleep apnea is an issue for you. And all the things that I’m going to talk about in this video, because I’m going to be moving quick, I will link in the description so that you can get further information on it.

Let’s go ahead and talk about all the different nutrients that I use and methods that I use in order to support reversing sleep apnea. First here on my list is antioxidants. Patients who have sleep apnea are known to have an increasing amount of oxidative stress in a decreased amount of antioxidant activity in the body. In order to support reducing oxidative stress and increasing your antioxidants, it’s great to take a really powerful antioxidant supplement to boost those levels up.

Next here is vitamins and minerals, and I’m going to recommend that you just do a good broad-spectrum high-quality multivitamin with mineral. Simply because fat soluble vitamins play a huge role in this process in reducing oxidative stress and in supporting the nervous system, but also minerals do as well. In general, just take a good multivitamin that has mineral in it and this will just kind of cover all the bases.

Next on our list is Thiamine. Now, Thiamine B1 deficiencies are known to affect the nervous system and cause a lot of stress on the nervous system and even affect breathing. What we want to make sure it that we’re taking a good thiamine, a specific thiamine supplement, or a supplement that actually is high in B1. I use a supplement called Neurosyn which is a cognitive support and neurological support and is loaded with B1 for that purpose. Make sure that we’re using this thiamine and typically if you have a deficiency in B1, you have a deficiency in the other B vitamins as well. That kind of leads back to the vitamin and mineral, okay just to cover the basis, but once again you’re going to want a supplement that has high amounts of B1 in it.

Now next here is ribonucleic acid. This is going to support cellular repair, cellular growth, and support the nervous system in its entirety, taking a ribonucleic acid is very powerful here as well.

If you need to lose some weight, focus on that. And because when we look at whether it’s losing weight or eating right, there’s so many people out there who started following the ketogenic diet or some other good quality diet and lost a bunch of weight and their sleep apnea just literally went away. This is going to be a really powerful thing to do as well and you don’t want to leave it out.

Go ahead and implement all these different nutrients and also make sure that you’re eating a clean diet and it’s really going to support reversing sleep apnea. Clinically, I have worked with patients to do this again and again and they’ve seen incredible results.

Give this video a thumbs up, share it with your friends. Like I said, there’s so many people suffering from this. This is a big deal and if you have any questions, post them in the comments section below. Check out my other videos that can help you improve your health and I’ll see you in the next video.