Neuro-transmitter optimization is critical to mental clarity, energy, and vitality. If you are suffering in those areas, it might be time to consider getting a non-invasive test from NuVision Excel. 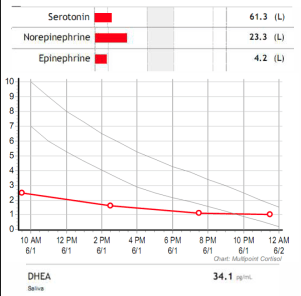 Compounding these symptoms of imbalance are the myriad of bioactive substances like caffeine, alcohol and nicotine and many of the medications used to manage these conditions as well as some cholesterol-lowering medications. These substances and medications can contribute to neurotransmitter depletion and resulting symptoms by suppressing or artificially stimulating neurotransmitter receptor function.

Putting it all Together: Neuro-transmitter Optimization

Identifying and managing neurotransmitter imbalances is facilitated with a noninvasive urinary test. Testing provides a tool to understand each patient’s specific neuroendocrine imbalances, which can be corrected with nutraceuticals, BHRT, diet, and lifestyle interventions.

Who needs a Neuro-transmitter Test?

Neurotransmitters are powerful chemicals that regulate numerous physical and emotional processes such as mental performance, emotional state, physical energy, and pain response. Imbalances in certain neurotransmitters are associated with most of the prevalent symptoms and conditions seen in practitioners offices today. A Neuro-transmitter test may be applicable to both male and female patients. Expression of the following symptoms can indicate a lack of neuro-transmitter optimization:

Interested in learning more? Read our article about hormone optimization.