Nobody likes to talk about digestive problems because public conversations about diarrhea, bloody stool, and constipation are not something your friends want to hear about. But GI problems are a major issue in modern society. It is estimated that over 350 million people suffer from gastro-intestinal issues on a daily basis. Some of these issues are not that severe, while some are absolutely devastating. In this article, I’ll review the 11 most common digestive problems and what to do to fix them.

If you suffer from a major gut condition such as Crohn’s or Celiac disease, then you are aware of what a healthy gut feels like vs. an unhealthy gut. For those who don’t have major issues like Crohn’s, then you may need a reminder.

The 11 Most Common Digestive Problems – what is NOT normal?

Here is a review of the 11 most common digestive problems. At the end of this article, I will share with you four basic tips to start healing your gut today 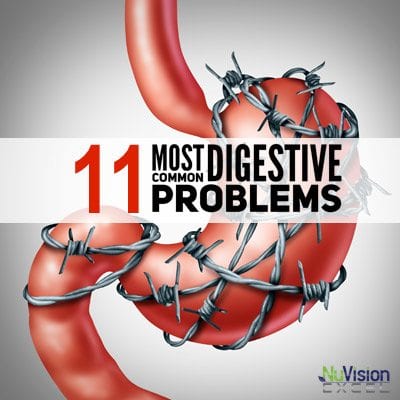 Leaky gut (aka increased intestinal permeability) is a condition where the tight junctions that construct the wall of the intestinal tract become inflamed and allow bacteria, toxins, pathogens, and undigested food particles to leak across the lining of the stomach into the blood stream. Obviously, this is not good. Food particles in the blood stream drives inflammation across the whole body as the immune system reacts eagerly to protect the body. In the case of severe leaky gut, an individual will find himself or herself becoming sensitive to almost any food that they enjoy regularly. This would then further drive inflammation, soon opening the gates for chronic disease. Learn more about Leaky Gut here.

Do you have pain or discomfort in the digestive tract, stomach pain, or need to make frequent urgent bathroom breaks? If so, then you may have a common problem called Irritable Bowel Syndrome (IBS).

Upwards of 45 million people in the U.S suffer from IBS. IBS is simply an inflamed and imbalanced gastro-intestinal system that gets upset through any minor irritant. Sometimes items that are believed to be healthy can be irritants when suffering from IBS. Though symptoms of IBS can vary greatly, it is often times triggered by food. IBS is typically a result of a health concern that is further upstream such as Leaky Gut and/or food sensitivities. Some of the foods that often cause irritation in the gut are dairy products, wheat, eggs, and fried and processed foods. Lifestyle factors such as stress are also known to make IBS worse as well.

Celiac used to be nearly nonexistent but now nearly 1 out 33 people suffer from Celiac Disease. According to a Celiac Awareness Foundation, 83% of people with Celiac Disease have been misdiagnosed with a different condition.

Celiac Disease is a severe sensitivity to the protein found in wheat, rye, and barley known as gluten. When gluten is consumed by people with Celiac Disease, their immune system begins to attack, damaging the villi in your small intestines. This is very harmful to the body due to the villi being important for the absorption of nutrients and food.

Symptoms of Celiac Disease can be severe in nature that include but are not limited to: vomiting, weight loss, anemia, fatigue, bone loss, depression, seizures, diarrhea and constipation.

The best way to protect yourself if you have Celiac Disease is to avoid gluten. There are no treatments for this condition other than simply avoiding the irritant. Alternative substitutes that can be used instead of gluten are almond flour coconut flour, brown rice, quinoa, lentils, corn and amaranth.

Another one on the list of common digestive problems is Crohn’s. Crohn’s disease affects 780,000 Americans every day, according to the Crohn’s and Colitis foundation. It is an inflammatory bowel disease that commonly affects the terminal ileum that connects the end of the small bowel and the beginning of the colon.

Crohn’s disease symptoms include intense abdominal pain, diarrhea, rectal bleeding, weight loss, and fever. Conventional doctors are unsure where this problem stems from but I have found it to stem from chronic toxicity and poor lifestyle. An example of this would be a patient of mine who had 12 mercury fillings in their mouth while eating junk food on a daily basis.

On a personal note, my brother-in-law suffered badly from this and his doctors told him that the disease would progress and he would either have to get parts of his colon removed or the disease would kill him. Fast-forward to today, he no longer suffers from this condition but the key is to remove the irritants, stop the inflammation, and heal the gut lining.

Symptoms of SIBO include bloating, flatulence, and or belching, cramps, diarrhea, and constipation. The common way to treat SIBO is through extensive rounds of antibiotics. Holistic doctors frown on this approach because antibiotics kill off everything including the beneficial bacteria. I find it is important to create balance in the gastrointestinal system in its entirety along with following a proper SIBO diet. More on SIBO here.

Gastro-esophageal Reflux is a little less common of a condition that people face but a problem non-the less. GERD is characterized by a burning in the middle of the chest as stomach acid backs up into your esophagus. Both heartburn and acid reflux experienced on a frequent basis is considered to be a sign of GERD. This condition is estimated to effect 20% of Americans.

Conventionally, GERD is treated through antacids or other medications but naturally it is reversed through a higher quality diet, balancing the gastro-intestinal system and reducing inflammation.

At number seven on our list of common digestive problems, comes Gallstones. More than 25 million people in America suffer from gallstones. The gallbladder is a small pear shaped sack under the liver in the upper right abdomen. The purpose of the gallbladder is to store and secrete bile for digestion. Gallstones are hard deposits that form in the gallbladder that can disrupt and block the flow of bile to the intestines.

This is sought to occur due to an excessive amount of toxicity and cholesterol within the bile. Early on gallstones can be reversed naturally but more severe cases can require surgery.

Ulcerative Colitis is an inflammatory bowel condition similar to Crohn’s that affects as many as 907,000 people, according to the Crohn’s & Colitis Foundation. Ulcerative Colitis is not only rooted in an inflammatory condition but also is an autoimmune condition. As a result, food is mistaken as an invader and sores/ulcers begin to develop along the gut lining. The area of the gut lining affected is the large intestines.

Symptoms of Ulcerative Colitis include bloody stool, urgent diarrhea, pain in the abdomen, and weight loss. Much like Crohn’s the key is to down regulate inflammation and heal the gut lining.

Hemorrhoids are a very common condition. In fact 75% of Americans over the age of 45 suffer from hemorrhoids. The major symptom of hemorrhoids is bright red blood in the toilet bowel when you have a bowel movement.

The mechanism that occurs with hemorrhoids is an inflammation of the blood vessels at the end of your digestive tract. Hemorrhoids can be both painful, itchy and can be difficult to treat. Herbal baths, high fiber diets, drinking more water, and some over the counter creams all provide healing and relief.

Severe diverticulitis can sometimes require surgery but more mild forms can be reversed through healing the gut lining naturally and following a bone broth liquid diet.

What can be done?

If you look at these common digestive problems, almost all of them lead back to uncontrolled inflammation, toxicity, bacterial imbalances and a compromised gut lining. Instead of chasing the symptoms associated with each problem, it is important to go upstream and fix the root cause. Many of these conditions are thought to be irreversible and that couldn’t be further from the truth. I highly recommend you read the “How to heal the gut article”. In it, I outline the 4 steps that are necessary to take to heal you gut naturally.

Top Formulas I Use To Heal The Gut

To heal the gut, I like to use specific formulas. The reason I use formulas is because they are dynamic blends of several gut healing herbs and vitamins that work synergistically to give you real results that last.

Just as it would make sense, I use a specific formula for every stage of gut healing.