This Keto Coffee Recipe is my favorite way to drink coffee. 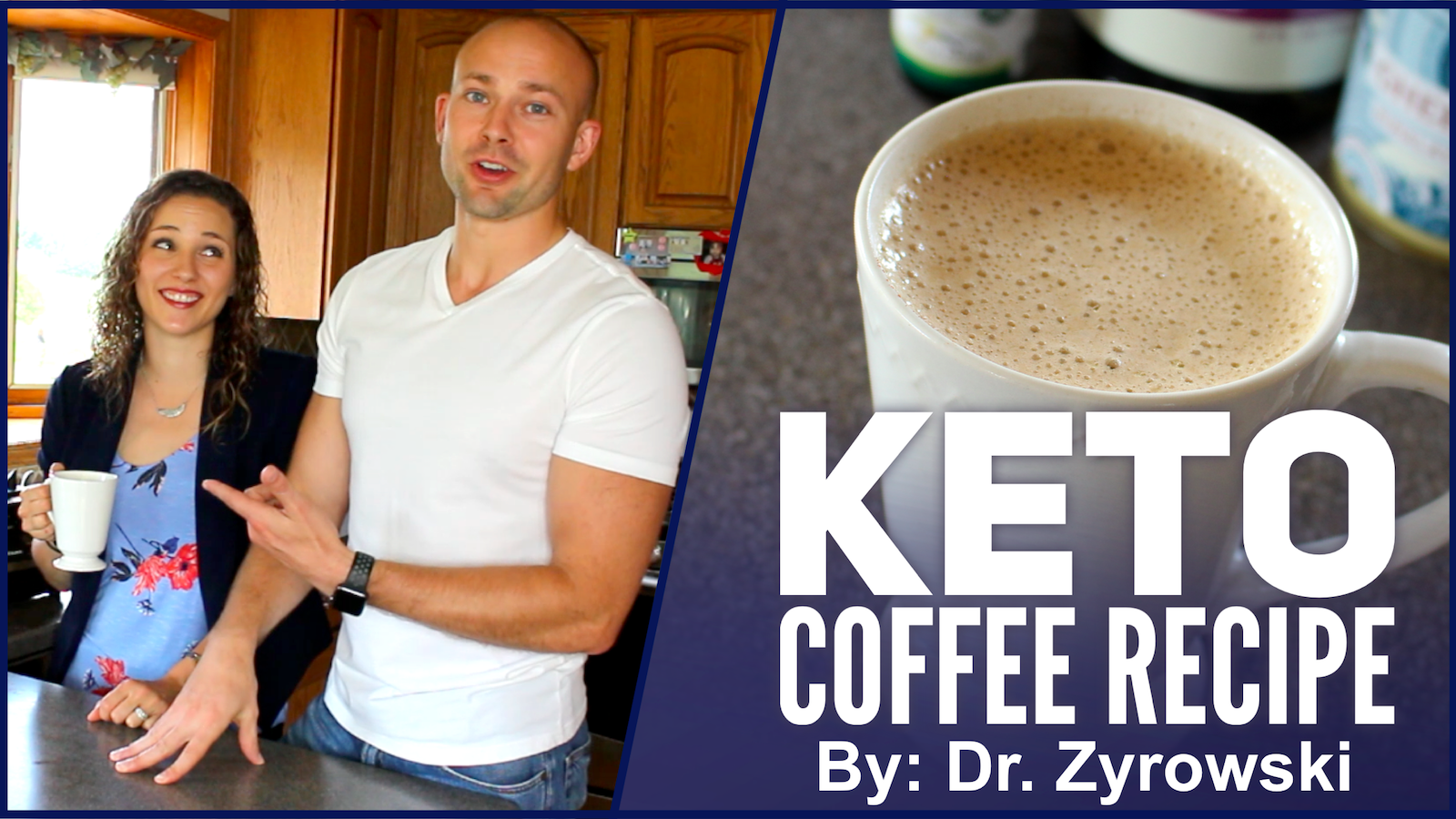 It is loaded with high quality fats and really gives your brain that extra boost.

This ketosis coffee recipe came from some fun experimenting in the kitchen. Everyone was talking about the benefits of bulletproof coffee and using all their fancy potions, but honestly, it doesn’t have to be that complicated. Buy yourself a good organic coffee, if you want decaf use Swiss water process, use a good coffee maker and you’re set.

This keto coffee recipe is delicious. I’ll be honest, I don’t drink a lot of coffee because it doesn’t agree with my genes. But when I do, I drink some ketosis coffee. This butter coffee offers many benefits for the brain, metabolism and cellular health. Many people who are on the ketogenic diet love this because it will actually raise blood ketone levels. So, if you ever wondered how to make bulletproof coffee, or butter coffee, this is your guide to my not coffee recipe. ENJOY!

Hey we’re here for another DIY video and I’m here with my wife Ashley. Hey guys! And in this particular video we want to talk about coffee. That’s something a topic that everybody loves.

First of all there’s a couple of things we want to show you on how to navigate with coffee how to brew your coffee and then also how you can use your coffee as a keto recipe. You can use it to have all the benefits with the fat that’s gonna really support your and brain in some pretty cool ways so you want to go ahead and get us started here?

Sure so you’re gonna start with your coffee grounds. Now you don’t just want to buy your favorite Starbucks blend of coffee you really want to be careful of what kind of coffee you’re choosing. And the reason for that is because look at coffee it’s the third most sprayed crop so we want to make sure you’re taking something that we’re getting good quality coffee because we don’t want something that’s you know just totally laced with chemicals heating it up then consuming it like most people do first thing in the morning.

The next thing that we’re going to add is some cinnamon. I just have some organic cinnamon here. Hopefully not very much here I like about an eighth of a teaspoon in my coffee. Cinnamon is great because it’s gonna help us because it’s loaded with the antioxidants. it helps support the brain and heart health and it supports preventing diabetes. So it just helps in so many great ways and it adds a great flavor to the coffee too.

Great and then the next thing add is about 1/2 a tbsp of ghee and it also has pink Himalayan sea salt in the ghee. So with keto or even fasting which by the way this isn’t fasting approved recipe the ghee and all that has calories in it that will throw you out of a fast but anyway with the ghee it’s nice to add and it’s cool to have in your coffee because it has a lot of benefits. It’s rich in butyric acid, it’s rich in CLA, which is gonna support gut health, it’s gonna support heart health and brain health. It has MCT’s in it the list goes on and on but yeah (?2:40) vitamins all of the adek  it’s got a lot of vitamins so anyway this is the one we’re using right here and this one’s cool specifically because it has the Himalayan pink salt in it. So it’s grass-fed as well now why would somebody use ghee over butter because I mean everybody’s heard about butter and coffee but why butter versus ghee. The ghee has the lactose encasing taken out of it and so if it is in there it’s in very very minimal amounts. Now you know we could use butter here just the same however just because I work with a lot of people who are sensitive to a lot of different foods,  I’m just erring on the side of caution and using ghee.

Alright and the next ingredient is some MCT oil again about a half a teaspoon here I’m sorry half a tablespoon. You know MCT oils it’s a medium chain triglycerides are really great because is able to be used as a super fast energy source for the brain and the body so going and putting MCTS in your coffee is just a great way to get that neurological boost first thing in the morning and that quick energy especially when in ketosis.

Awesome and now many people like their coffee just like this. I personally like sweetener in my coffee. My sweetener of choice would be this is a xylitol erythritol blend and that’s what I use in my coffee. Now if you don’t do well with sugar alcohol we also have sweet leaf Stevia this one’s vanilla cream but they have all different kinds of flavors they have chocolate, they have just plain original so you can choose a variety of different flavors there for your coffee so I’m just gonna add my xylitol and erythritol to the coffee here. We’re a big fan of the sugar alcohols like xylitol erythritol because we like that it doesn’t have that Stevia taste to it when we like that but you know we do realize and you also should be fully aware that some you know we do realize and you know you also should be fully aware that some people do not do well with it and one more note about xylitol before we go further because I know that somebody will ask this and the questions and it does it raised insulin levels and it’s a complicated answer because the truth of it is that it’s yes and no. The reason it’s yes it’s because just the taste of sweetness and the mouth can actually raise insulin levels in some people and not in others so other and many people are just fine it’s not gonna raise blood sugar because it’s not a sugar so I wish I could give you a more direct answer on that but it’s very unlike a case by case basis however we’re using a very small amount in here and so you should be just fine with it.

Okay so no we just need to blend up our coffee because we have a Vitamix here we don’t have to put the lid on I’m gonna just turn it on and set it to two blend if you have a say like a Bullet or something like a Magic Bullet something of that nature you just want to make sure like I said use a more coffee not super hot. Real quick before you blend that when you’re blending the coffee with the fats in it it’s best if you blend it at a higher speed just simply because it actually mixes it well if you just blend it to the point where it’s just simply like stirring it up you’re gonna pull it out and it’s gonna have all those oils sitting on top and it’s likely not gonna be something that you like it also make sure you just turn that blender up a little bit in order to get it blended and whipped real well.

Alright now that it’s blended up, you can go ahead and just enjoy. Can’t wait to try it.

Hey guys so this is how you non-toxic keto coffee be sure to give this video a thumbs up share it with your friends and also don’t forget to subscribe to the channel.

Is the coffee good?

I actually don’t even drink that much coffee and I actually really appreciate this so it’s great.

Alright until next time folks, we’ll see you in the next video.