Home » [VIDEO] Is Caffeine Bad For You

[VIDEO] Is Caffeine Bad For You

Many American adults love coffee, soda, or energy drinks.  But is caffeine bad for you? In this segment, I’ll review the topic of caffeine sensitivity and teach you everything you need to be aware of when it comes to caffeine. 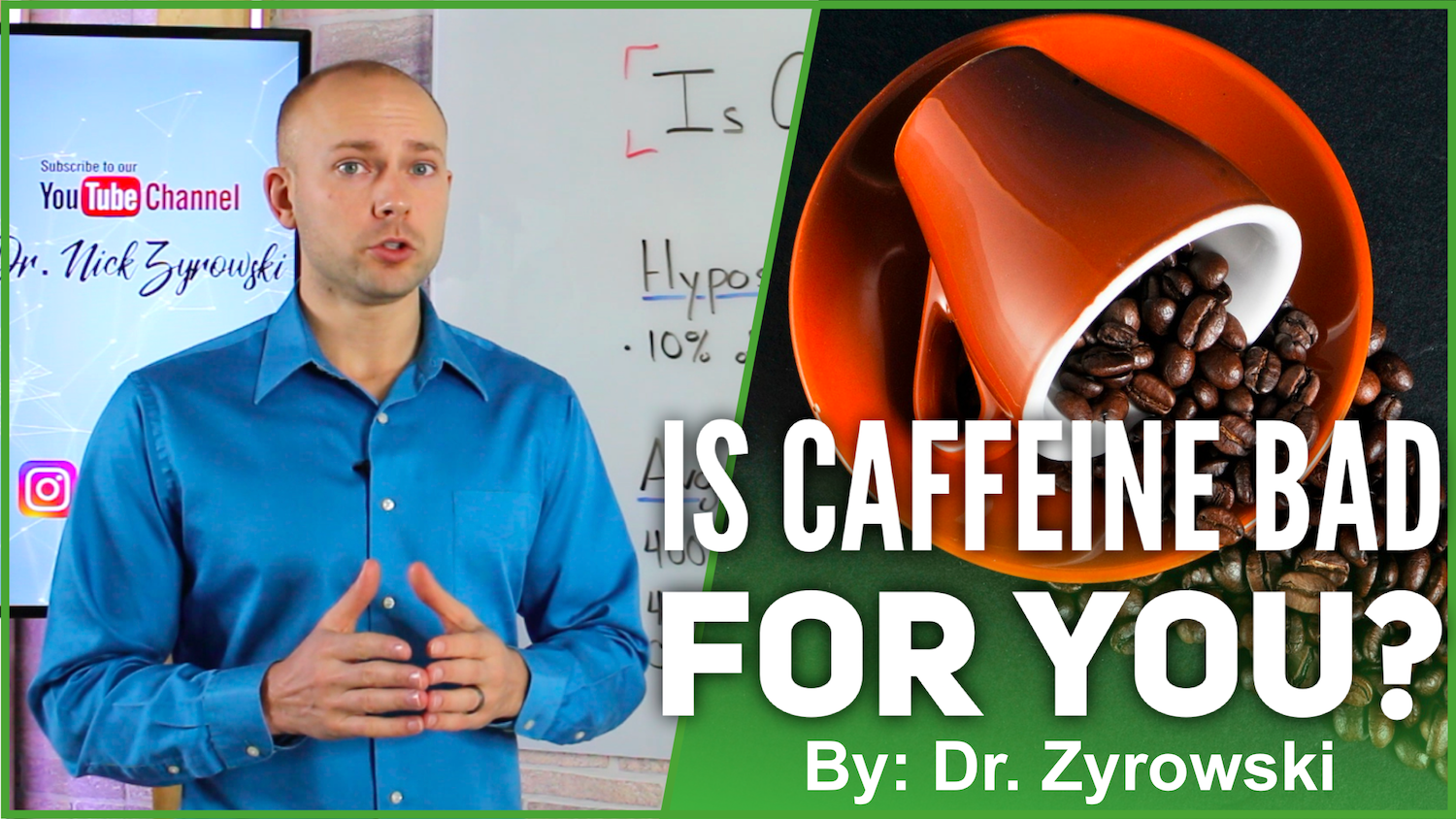 Is caffeine good or bad for you? This is a great question because caffeine has so many benefits.

Because of its great benefits many people act as if caffeine is great across the board for everyone. Truthfully, there is a large group of people that react very negatively to caffeine. So when you ask, “Is caffeine good for you?”, it all depends on who you are.

So is caffeine bad for you?  The answer depends on your body and how you react to it. Some people can drink caffeine whenever and not see bad results simply because they metabolize it fast. There are some individuals who drink coffee at night and then go to sleep. Although there are extremes on both sides of the spectrum, it is recommended that no one consumes more than 400 mg of caffeine a day.

The best decaf coffee to get: Swiss water process

[Video Transcription] Is Caffeine Bad For You | How Much Is Too Much?

In this video, we’ll discuss whether or not caffeine is bad for you.

Hi ladies and gentlemen, I’m Dr. Zyrowski, and welcome back to the channel. If you’re new to the channel, it’s a pleasure to have you here. Be sure to subscribe, hit that bell notification, and join our notification community, so I can help you excel your health and your life.

In this video, we’re talking about is caffeine or coffee bad for you? This is an important topic because we know that caffeine will boost cognitive performance. It will boost physical performance. There’s a lot of benefits of caffeine, but what we don’t know in most cases is that it can actually have some negative side effects on people, and some people shouldn’t be be having caffeine at all. Let’s go ahead and jump right into this, and let’s talk about the three categories in which people fall into when it comes to caffeine sensitivity.

Now we have the average sensitive person or the person who has a more normal sensitivity to coffee. Now this person can drink about 400 mg of coffee a day and it seems to not affect them in a negative manner at all. Basically what equates to, if we’re talking about coffee, is about four 8-ounce cups of coffee per day. Now these same people, if they start drinking more than that, can start having some negative side-effects, which we’ll talk about here in a minute. But on the average person, the normal person, who has a normal caffeine sensitivity, this what they can get away with, and it actually has lots of benefits.

The next category of people are the hypersensitive people. This is the category that we really need to discuss because these are the people being told that they can drink coffee and it’s going to have all these benefits; yet they drink it, and they feel awful from it. It’s because it has a very powerful impact on the body. It impacts them in a much stronger way than it does the other individuals. Essentially, the reason this is happening is because they’re not metabolising it as fast, and they’re having different symptoms of anxiety, insomnia. So they can drink a coffee in the afternoon and then essentially find themselves not being able to sleep at night. Restlessness, headaches, even migraine headaches, nervousness, and then palpitations, which is pretty serious. Now, I also find that anxiety and nervousness along with this undue stress all comes together, and so they find themselves in a place that they don’t want to be in simply because they’re stressed out, and they’re nervous. If you’re hypersensitive to coffee, be aware of that.

So you’re next question might be, ‘why does this happen?’. Well, there’s a couple reasons. First, genetic variances. There’s a CYP1A2 genetic variance. Essentially, what that is is, a liver enzyme that that just causes you to break caffeine down much slower than other individuals. So as a result, it’s going to impact you much more strongly. The other thing it’s going to do, it’s going to last for a much longer period in the body. There’s also the ADOR2A genetic variance where it just simply means, if you have this genetic variance, the research shows that you are hypersensitive to caffeine. When we look at this, the last thing I want to mention is that people who have a lot of adrenal stress are also going to be hypersensitive to caffeine. Essentially, your nervous system is stressed out, but yet you’re brain is telling you that you have energy and you should keep going, so you’re just pushing your body beyond its limit so to speak. This hypersensitivity issue can be a result of having some adrenal strain as well.

There’s a couple things to taken into consideration. People who are hypersensitive, it’s estimated that you should drink 50 mg of caffeine or less. This is about a 4 ounce cup of coffee when we look at it in how it equates to coffee. The other thing you can do is just cut it out of your lifestyle all together, and then you can also drink decaf coffee. Basically, when you look at decaf coffee, you just want to make sure you’re getting the Swiss water process so that harsh chemicals haven’t been used to take the caffeine out of the coffee bean.

The other thing that we use when it comes to people that are hypersensitive is our energy drink is actually designed for people who have that adrenal stress and is designed for people who are hypersensitive. What we have in there is a slow-release caffeinated process, and you get the benefits from the caffeine: the cognitive performance, the physical performance, but it has a slow-release process, so it doesn’t impact you as greatly. It releases very slowly, and it doesn’t have the impact on the people who are very hypersensitive. I will put a link to that in the description below:

When we look at caffeine, it’s so important to know that yes, it has a lot of benefits, but for some people it’s not great.

The other thing too, I want you to go put in the comment section below if you would, put what category you fall into. I’m just interested in knowing the numbers wise, the people who are hypersensitive, the people who are hypo, and the people who just fall into that normal category. Put that in the comment section below, I’d greatly appreciate that and then give this video a thumbs up and share it with your friends so that they can know the truth about caffeine. Then, subscribe to my channel if you haven’t done so yet, and then lastly, check out my other videos on how you can improve your health.