HIIT For Fat Loss explains why high intensity interval training (or HIIT) is the most effective exercise for losing weight and keeping it off. 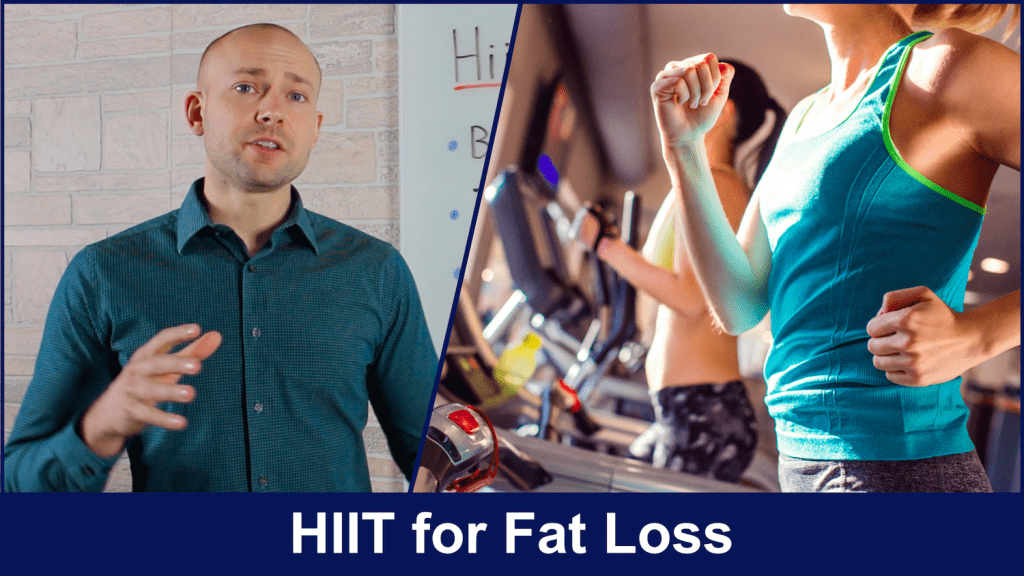 When I talk to my patients, one of their most common desires is to lose weight. They might exercise all the time, even eat great, but somehow they just can’t burn off the fat. Well in video, I’m going to give you the most effective workout you will ever use for burning fat, along with building muscle: High-Intensity Interval Training (HIIT).

I’ve been doing HIIT for over five years and have been so impressed with the results it’s given me. HIIT is a workout that is done at a very intense level in a short period of time. So instead of going out for a run for 40-minutes, you will do 20-minutes of HIIT. This form of exercise gets your body going at a much higher heart rate, and it’s super efficient when it comes to time! Here’s how it can help you burn fat…

First, HIIT burns your sugar stores. When you do long-term cardio exercise, you tend to burn fat instead of sugar. With HIIT, your body is burning sugars during your exercise.  When you exercise at an intense level, your body goes to the most readily available energy store, which is sugar! It’s basically a survival mechanism! Not only that, with HIIT your body is going to be burning fat for upwards of 48-hours after you finish.

Another benefit of HIIT is that it increases your human growth hormone levels (HGH). When your body burns sugar, it raises your HGH levels to help repair tissue and replenish your energy stores. Not only does it help your body burn fat, HGH also helps with muscle growth and builds strong bones, along with an anti-aging benefit.

Finally, HIIT also reduces your cortisol level, as compared to long-term cardio exercise. People who are training for long-distances have consistently high cortisol levels, causing inflammation and preventing fat burning. That’s fine in short duration, but when it becomes chronic, that’s an issue. With HIIT, this isn’t a problem as it will only boost your cortisol levels gently.

I’m about to uncover the most effective workout for burning fat you will not want to miss this.

Hi, I’m Dr. Zyrowski from nuvisionexcel.com. If you’re new to the channel then it’s a pleasure. Be sure to subscribe and hit the bell notification if you want to excel your health and your life and you’re going to be well on your way.

In this video we’re talking about high intensity interval training or HIIT for fat loss. It’s such an effective exercise when it comes to both losing weight but also preserving muscle growth and I’m going to go into the science of it.

But first let me tell you what high-intensity interval training is. First of all, it’s something that I have used in my exercise routine for five plus years ever since the science became very clear how effective it is. I started utilizing it right away. Now what high-intensity interval training is. It’s simply a workout that is done at a very intense level in a short duration of time. So versus steady-state cardio where you would go and workout or run for 40 minutes at 50 to 70 percent of maximum heart rate, high-intensity interval training training will be done in 20 to 25 minutes in a very short duration of time but at 85 to a hundred percent maximum heart rate. So it’s going to be very intense. It’s designed to be intense within a short duration and I really love it because it’s very efficient when it comes to time. When you look at exercise some people say they don’t have the time to do it anybody has 20 minutes to exercise on a regular basis and once we go over the benefits of it you’ll want to do it anyway.

And so when I do high-intensity interval training what I like to do is I like to do it in a sprint fashion. So what this means for me is getting on the treadmill. I’ll turn the treadmill up to about 12, on some days I’ll put some incline in there, some days I won’t, it really just depends on how I’m feeling. But I’ll increase the speed of the treadmill to 12 and then I’ll jump on there and I’ll sprint for 30 seconds on and then I’ll take a 30-second break and then I’ll sprint for 30 seconds and then I’ll take a 30-second break and I’ll continue to do these intervals of sprint’s for 20 to 25 minutes. At the end of this I can tell you that I have complete exhaustion. So it’s a really great workout.

Now the reason that you burn sugar during the exercise, you burn the stored glycogen is simply because it’s like a survival mechanism of the body. So, when you’re in this fight-or-flight survival mechanism the body needs quick energy. Because you’re doing this exercise at an intense level, the body says I need energy and I need it now. So what does the body do the body goes to sugar it goes to glycogen stores and it burns that for energy during the workout. And as I said, the great thing is, is that you burn through those glycogen stores, those sugar stores, then from there you’re going to burn fat for the next 24 to 48 hours. And now that is a solution for fat loss.

The next big reason it works so effectively for just preserving good health preserving good muscle mass but also burning fat is because it increases your growth hormone levels. The reason it works so well is because you’re burning sugar and because the workout is very intense the body’s going to raise growth hormone levels. And the reason it does this is not only for repair purposes of the body but also in order to help replenish those energy stores in the body. So when you have raised anabolic hormones like growth hormone and testosterone you’re going to burn more fat because the body needs to turn that fat back into energy. Then you’re going to be burning that fat for the next 24 to 48 hours as it raises anabolic hormones like growth hormone testosterone. Now the reason that growth hormone is so effective and really awesome to have raised in your body because it has many benefits. It has a muscle building benefit to it it has a bone building benefit to it it has an anti-aging benefit to it a fat burning benefit. You see all these different actors and these people in Hollywood that are getting growth hormone treatments in order to actually feel better and look younger and build muscle at an older age. No matter what age you are growth hormone is going to benefit you in a great way. So doing high-intensity interval training has been scientifically proven to boost those growth hormone levels.

So the next reason that high intensity interval training is so effective for fat loss is because it increases the excess post-exercise oxygen consumption. So when you’re doing this exercise and working out very intensively then your body creates this oxygen debt and this debt has to be repaid. So over the next 24 hours and post-workout, essentially what happens is your body is going to have to oxidize fat for energy in order to replenish this oxygen debt which is owed. During this time essentially what’s going to happen is you are going to turn your body into a fat-burning machine as this debt is being repaid.

Now the next thing that happens and it works very effectively is doing high-intensity interval training will help keep your cortisol levels low compared to doing long term steady-state cardiovascular exercise. So what this essentially means is people who are marathon runners, people who are training for races that require them to run long distances, you know athletes. Essentially what happens is because of this intense training in its long duration essentially the cortisol levels get boosted and boosted consistently so any athlete who’s truly trying to take care of themselves and who is running a lot of distance is going to always be concerned with trying to keep their cortisol levels lower.

Now when you have high cortisol levels in the body, you’re going to have more inflammation in the body, you’re also going to not be able to burn fat as well. Cortisol will have a catabolic breaking down effect on the body. It’s okay in short duration in short-term but when it becomes chronic it becomes an issue. So long-term steady-state cardio doing it on a regular basis is going to boost those cortisol levels. However, doing high-intensity interval training is going to just boost them gently but not do it in a chronic way. So that’s why high-intensity interval training is better off than a lot of long-term steady-state cardiovascular exercise because it’s going to keep that cortisol low.

So, the last thing I want to mention here is be sure to check out my other videos on fat loss. I have some super powerful videos that help you lose weight. Now the other thing is be sure to give this video a thumbs up I’d greatly appreciate it. Post any questions that you have in the comments section below, even other video recommendations, I’d appreciate that as well and then until next time folks make it a great day.