Whether you’re an active athlete or not, your lifestyle may leave you depleted of some very important nutrients. You’ll want to watch this video to see if you have these electrolyte deficiency symptoms and what to do about it. 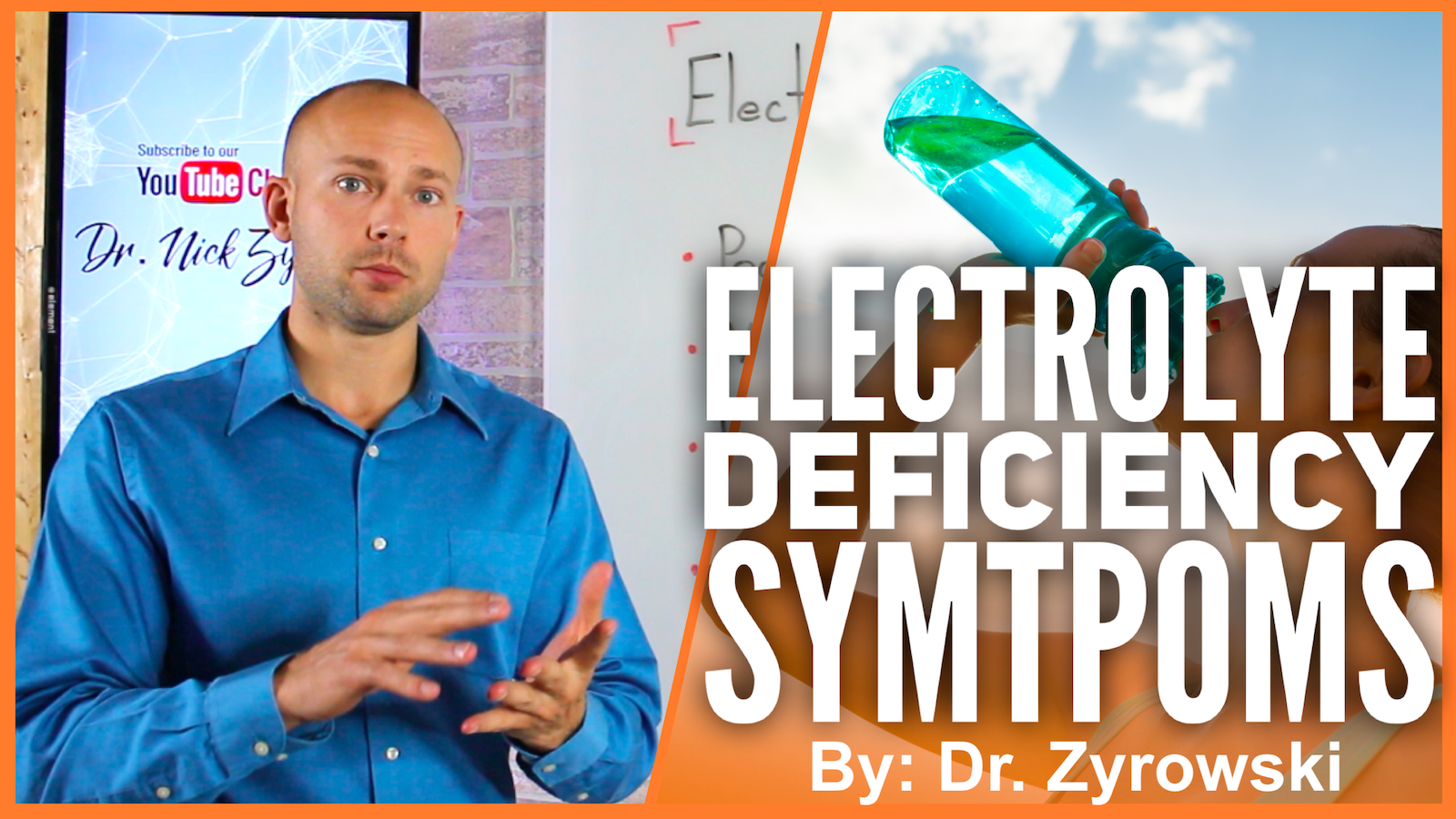 Electrolyte deficiency symptoms can be very difficult to deal with. They can cause an array of symptoms that are quite extraordinary in nature. These symptoms can be as simple as a muscle twitch to as scary as heart palpitations.

Electrolyte balance in the body is crucial for you to feel well.

When your electrolyte balance is off you literally feel like your health could slip away at any time.

I put myself into a severe electrolyte deficit simply because I was unaware of the amount of electrolytes I needed to function on a daily basis. Thats when I knew that recognizing electrolyte deficiency symptoms is very important. Between the ketogenic diet, fasting, and heavy exercise, I completely depleted my electrolyte levels. I was making efforts to increase my electrolyte levels through consuming sea salt, and taking a multi vitamin but it wasn’t enough. I wasn’t aware that I wasn’t consuming anywhere near the amount I needed on a daily basis. The reason this happened was because at the time there were no endurance athletes combining all of these lifestyle strategies together so the information wasn’t out there.

Electrolyte deficiency symptoms are all described in the video and should not be taken lightly. A simple muscle spasm sounds simple. But a muscle spasm to the heart can mean death. I believe electrolyte imbalances should be taken seriously and not overlooked.

I recommend my electrolyte powder to those who are serious about replenishing their electrolytes. This electrolyte replacement drink tastes great and not only offers you more electrolytes, but also B vitamins, powerful antioxidants and sustainable energy.

In this video, I’m going to teach you how to know if you have an electrolyte deficiency.

Hi, I’m Dr. Zyrowski from NuVisionExcel.com. If you’re new to the channel. it’s always a pleasure to have you here. Be sure to subscribe, hit that little bell notification, and I’m going to help you excel your health and your life.

In this video, we’re talking about electrolyte deficiency symptoms. When we look at electrolytes, there’s a lot of different symptoms that arise. Now, clinically, there’s a lot of questions that we ask to determine if somebody could potentially have an electrolyte deficiency. So, we’re going to go through these and I’m going to talk about each and every one of them because as I’ve mentioned in another video, I’ve probably had about every symptom there is when it comes to electrolyte deficiencies because I drove myself into a huge deficit after doing a low carb diet for many years, way before keto was even cool, and also going strenuous exercise using intermittent fasting and other forms of fasting as well.

Now, a lot of people unknowingly have this same problem because along with intermittent fasting, and ketogenic diet, and exercise, also many people have rapid weight loss which will cause an electrolyte deficit. So, when we look at these electrolytes they can cause a lot have havoc in our body.

So, let’s go ahead and jump into these different questions that you can ask yourself and determine if this is something you’re facing. The first here is poor muscle endurance. So, are you someone who goes to the gym and you feel like no matter how hard you work and how much effort your put in, you just don’t have that endurance to do a lot of reps with your weight or even do any type of long-distance cardio because your endurance is so bad? Well, there’s a good chance you could have an electrolyte deficiency. This certainly was the case for me. So, definitely keep that in mind.

The next thing is, muscle cramping. So, whether it’s muscle spasms, or muscle twitching, or muscle cramping, they’re all related. So, a lot of time you’ll get muscle cramping, you’re familiar with that. Muscle twitching will typically happen in some smaller muscle groups like around the eye, around the mouth, maybe in the feet, that sort of thing. But, if you’re getting any of that then once again, electrolyte deficiency is probably an issue for you, and this is something that I’d wake up in the middle of the night with cramps so bad I couldn’t even walk them off, and so, once again I can tell you that I’ve experienced most of these here.

Next is, frequent thirst. This one’s pretty interesting because how I would explain this is, that you feel that you’re just very thirsty, you need to drink a lot of water but then you start drinking your water and you’re like ‘I don’t want any water, I’ve already drank enough’, but then you put the water down and then your mind is going, ‘wow I’m really thirsty’. And so, it’s a kind of a frustrating thing but if you have an electrolyte deficiency you can feel that way and no matter what you do, you can’t really seem to satiate that thirst.

Next here is, frequent urination. This one’s a pretty interesting one because I had a really young gentleman in his twenties come to me and one of his major complaints is just like, ‘man I’m running to the bathroom all day long and then all night I’m actually running to the bathroom as well, you know, multiple times’. You know, he’s young enough that we’re not thinking prostate here, but we are thinking, okay this is someone who’s on a ketogenic diet, someone who’s doing all the right things and exercising. Well, it turns out he has an electrolyte deficiency. As soon as he balanced that out he was able to cut his bathroom trips down by probably 70%. And so, frequent urination is a problem here. And you know, these two obviously play into each other, frequent thirst, frequent urination, but the frequent urination is very frustrating for some people. So, definitely look into some electrolyte deficiencies there.

Swelling in both the ankles and the wrist, that’s an electrolyte deficiency.

And the next one is, breathing. We’re thinking shallow or rapid breathing. This one’s actually really a funny one here and it’s one of those things that we just take for granted that we breathe normally on a regular basis, but people who have an electrolyte deficiency it’s almost like they forget how to breathe or they lose that proper breathing rhythm. So, what you’ll have is you’ll find yourself taking very shallow breaths, and not like on a consistent basis but you’ll go through kind of like bouts of it. So, very shallow breaths, or very rapid breaths and then you’ll start thinking to yourself, ‘wow, what did I forget how to breath’ and then you’ll focus on breathing in, breathing out, but you really don’t know why it’s a problem for you. Well, that actually is a problem with a electrolyte deficiency.

So, these are all things that really disrupt your life in a big way. I mean, I even had personally a problem with high blood pressure where the longer I fasted, my blood pressure would continue to creep up. So once again, that was related to electrolytes. And so, all these different symptoms right here can be a major problem if you’ve put yourself in a huge electrolyte deficiency, and let me tell you, you feel awful. Exercise feels awful, everything feels awful with an electrolyte deficiency. So, how do you bring them back up?

So, first of all, you can take a multi-vitamin that has these different electrolytes in them, which is powerful, right? For me, that wasn’t enough. The other thing that you can do is you can actually increase your amount of sea salt consumption which has good electrolytes in it. For me, that also was not enough and I couldn’t consume enough salt to actually hit the levels that I needed. you know, at the time I was using pickle juice, that was recommended, that’s kind of an athlete trick. Well, if you do any type of endurance stuff, pickle juice, but actually research proves to us now that pickle juice is totally ineffective.

So what I do is I actually supplement it. I take a powder. I’ll go ahead and link the one that I use in the description below. It’s an electrolyte power/energy drink and I use it as a pre-workout but I also use it throughout the day to give me a boost and also, mostly, boost up my electrolyte levels because I can tell you taking a multi-vitamin, and also eating a lot of sea salt, and using some of these different methods, like even cream of tartar that’s high in potassium, that was not nearly enough for me doing endurance training and following the ketogenic does and all these other things. So anyway, I have to supplement with it. Many people should be supplementing with it even though they’re not because it feels so much better.

I did another video on electrolyte deficiency and one meal a day because that’s something that people who are fasting or doing intermittent fasting have a problem with. If you want to check that video out, go ahead right here. I just list a bunch more different symptoms that people face.

Other than that, go ahead and give this video a thumbs up. Share with your friends because if they have an electrolyte deficiency symptoms, I can guarantee you they feel awful. You just can’t feel good with it.

And then other than that, subscribe to my channel, check out my other videos over here on intermittent fasting and ketosis and then I’ll see you in the next video.