[VIDEO] Does Fat Make You Fat

For years, people avoided fat in foods because they thought dietary fats would make them fat.  In this video, we will answer the question, “Does Fat Make You Fat”, and focus on the truth about fat and the research that backs it up. 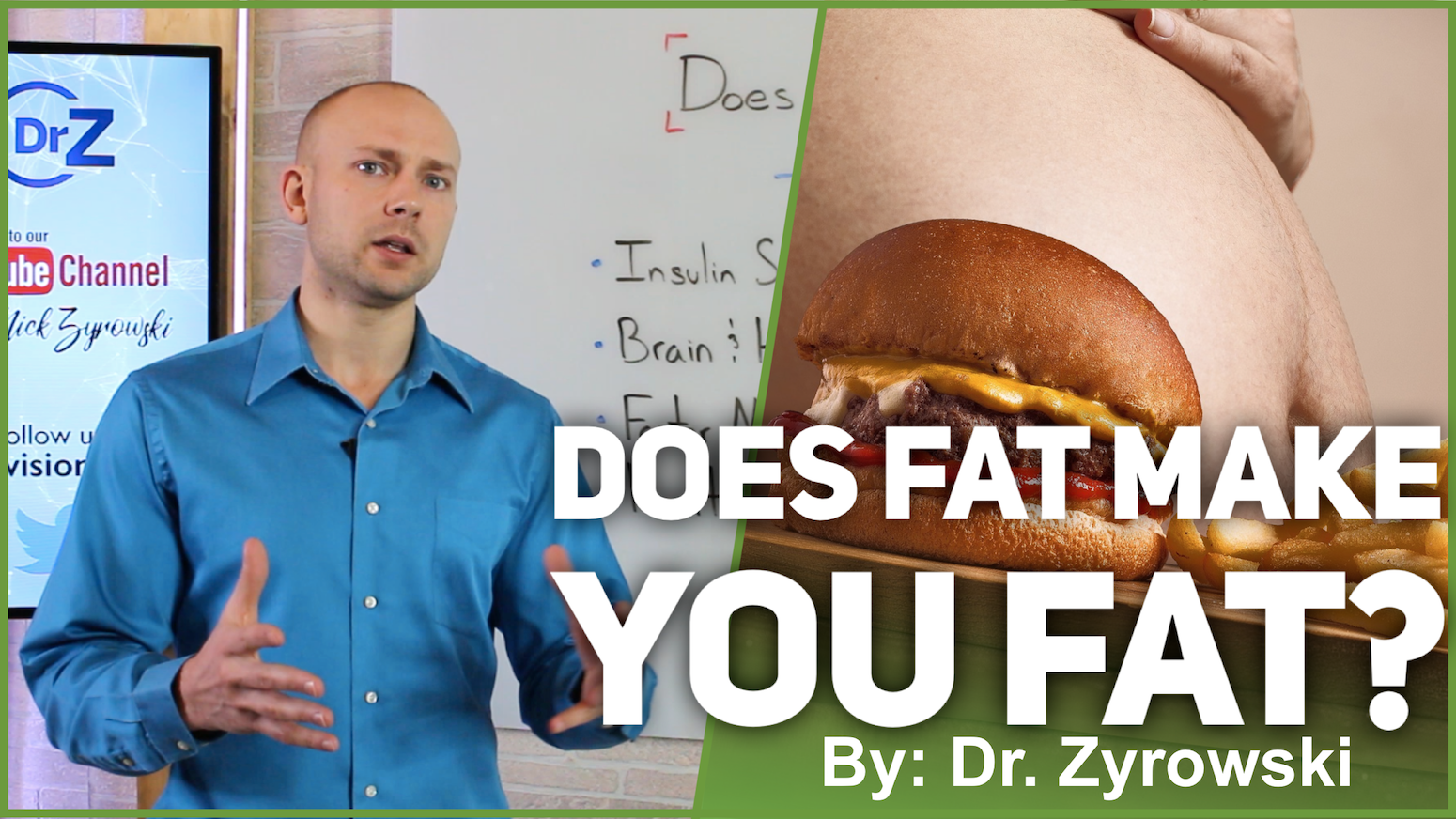 There is a huge misconception that if you eat fat that you are somehow going to gain a whole bunch of weight and get fat. Large organizations and health institutions have fed the public this belief system for many years. Can fat make you fat and cause heart disease? Or is it really that the carbs make you fat? When pairing a high fat high carb diet you will have a recipe for disaster but high fats alone have proven to be healthy.

Eat fat for weight loss is a funny concept when you think about it. But once again, the research is on our side when it comes to this topic.

Multiple studies have been done on high fat foods and proven that they do in fact support weight loss.

It’s really that simple – eat fat lose fat is a real thing and many people can attest to this. The health benefits of saturated fats include weight loss, nervous system health, cellular health and a decrease in inflammation. I personally find that when people have insulin insensitivity and blood sugar imbalance they can increase their healthy fats and find that they don’t crash as much. As a result you can eat fat, lose weight, be much healthier, and feel better overall.

Some people have asked ‘how much fat should I eat per day?’ and the answer to that is quite simple. I recommend finding a free online keto calculator that will help you determine not only your daily fat intake, but also your total calorie, protein and carb intake as well. Does fat make you fat is a simple concept that has been debunked numerous times.

[Video Transcription] Does Fat Make You Fat | Must See Research!

In this video, I’ll uncover whether or not fat actually makes you fat.

Hi, ladies and gentlemen, I’m Dr. Zyrowski and welcome back to the channel. If you’re new to the channel, it’s a pleasure to have you here. Be sure to subscribe, hit that bell notification, and join our notification community so I can help you excel your health and your life.

So basically, let’s go ahead and start, first of all, with insulin. Now when we eat carby food, when we eat high sugar diets, essentially what happens is we have massive blood sugar instability, massive blood sugar spikes, and insulin follows along with that. Now, when we actually have insulin that goes high in the body, what happens is that we start to actually put on that weight. We start to put that fat on the body, and so one of the things that we know based on research is that when we eat fat, it is a more balanced reaction. It’s a more balanced blood sugar reaction. It’s a more balanced insulin rate reaction. We’re not getting those huge spikes out of eating fat, so therefore it’s actually able to keep insulin levels much more balanced, and as a result, you’re actually going to not be storing fat. Now that’s the first thing here.

Now, the next thing, is hunger and cravings and things of that nature. Now, when we look at how the brain works with carbohydrates and sugar, it’s pretty crazy because what we found basically – there was a study done by Kevin Hall from the National Institute of Health and what they did is they went and did some brain imaging, and so, with that brain imaging, what they had found is that people who are on high fat diets simply shut down the hunger and craving centers in the brain; conversely, those who are eating the high sugar diets and the high carbohydrate diets, they started to activate those craving and hunger centers in the brain. And as a result, well they wanted to eat more calories. So anyway, that’s a really important study there. So, fat is actually going to make you not want to eat as much. Essentially, it’s going to be more satiating. The brain is going to just understand that, ‘hey, we’re good, it’s okay. We don’t need to keep eating. We don’t need to keep snacking.’ So that’s important there.

Now, there’s also another study, which was done by, Harvard and basically what they did is they took two groups of individuals. One of them was on a very high fat diet. Now the group that was on the high fat diet, they had an increase in calorie burn. And so, this is really interesting because basically what we found with this is that with this high fat diet, these individuals were burning about 300 calories more per day just by following a high fat diet. And so, the other thing that they found is with that increase in 300 calorie expenditure per day, they were actually having improved blood markers like triglyceride levels, improved cholesterol levels. So once again, that’s very important and it brings us into our next topic because a lot of people still are very concerned about heart disease.

Are you going to get heart disease if you’re consuming a whole bunch of fat – a major concern for a lot of people. Now here’s a really interesting fact about this, back in 2010 they took 21 different studies and they reviewed them. Of these 21 studies, basically, what they had over 340,000 participants. And what they had found is, that there is absolutely no correlation in consuming more saturated fats and the increase risk of heart disease. And so, when we look at eating more saturated fats and clogging up our arteries and causing fatal heart attacks, it’s just not true.

So anyway, what we have to do is kind of put all this into perspective and what we’re seeing so far is first of all calories aren’t created equal. And we’re also seeing that the fat is going to act very differently on your metabolism. And then also your brain and your whole entire body acts very differently with fat and fat doesn’t actually cause you to put fat on, but it actually causes you to burn fat in many cases. So, what we want to do is actually look at some of these different fatty foods and just talk about some of the research behind them. Now when we look at these fats, they have been condemned by highly regarded organizations and institutions for so many years.

And so, let’s go ahead and first start with butter. Now, butter is one of those fats that everybody was supposed to stay away from. They’re actually supposed to start consuming margarine because butter was so unhealthy. Well, we know now with actual factual data that butter is completely healthy for us. It’s good for our brain, it’s loaded nutrients and it has something called CLA in it and that’s conjugated linoleic acid. That CLA is actually going to boost our metabolism and help us burn fat. So, when we look at consuming this fat, it actually is going to help us burn fat.

Let’s look at coconut oil, for instance. There’s one study out there that basically looks at coconut oil and if you include coconut oil into your breakfast, you consumed much fewer calories when it came around the lunchtime. And so, coconut oil is loaded with MCTs and has been proven time and time again to help people consume less calories. As a matter of fact, what happened too with coconut oil is that when people are actually using these MCTs throughout the day, it was found that they were burning as much as 250 more calories on a daily basis. So that is another fat that of course is going to help you burn fat as well. So, it’s not going to make you fat.

Next is, fatty fish. Now fatty fishes loaded with Omega-3s. Omega-3s had been scientifically proven to actually increase your satiety, increase the feeling of fullness. And so, you know fatty fish like sardines, like salmon are really great because they’re loaded with those Omega-3s. And then the other thing about fatty fish is they are very high on the satiety scale. And so basically, there’s a scale out there that looks at different foods and kind of which ones hold you over for a long period of time. Fatty fish is one of them – it’s very high and it’s actually a much more high satiety food than other sources of protein like chicken for instance.

And then we have eggs. Eggs are another food that’s been highly condemned for so many years. You were supposed to stay away from eggs. And if you wanted to lose weight and eat eggs, then you needed to just stick to the egg whites. That is a bunch of rubbish. And when we look at eggs, there’s lots of studies as well. There was actually one study that was done over an eight-week period and what they found is that people who actually replaced a carby, sugary breakfast with eggs had significant weight loss. That’s what it said – significant weight loss. And so, that’s one way that we see that eggs really help with weight loss. But also the other thing that was found is that people who are consuming eggs for breakfast, which is considered a very high satiety food, essentially consumed fewer calories throughout the day and ate less. So, when we look at eggs, it’s a huge winner when it comes to overall burning fat.

Now we could keep this list going forever. We can talk about avocado and the benefits and research behind that when it comes to weight loss. We can talk about olive oil. I mean the list goes on and on. We look at all these fats that have been condemned for so many years. But the truth is, now we know, is that when we look at fat, first of all, not all fats are created equal – nine calories per gram of fat – but the deal is they are not created equal – they act differently on the body. We know that the research proves to us that it’s going to really help with satiety. So, it’s going to help us not be as hungry all the time. It’s going to help us not only burn fat, but it also is going to help us consume fewer calories throughout the day.

So anyway, when it comes to this topic of fat, make sure that you are sharing this information with your friends cause there’s so many people who are very confused by this topic and a lot of people still think it’s causing heart disease, which I proved to you that that is not true.

And so be sure to give this video a thumbs up and share it with your friends. If you have any questions, put it in the comment section here below. And subscribe to my channel if you haven’t done so yet. I greatly appreciate that. And then check out my other videos on how you can improve your health.