Bone Broth Fast Benefits is a video that teaches you how I use fasting and bone broth in combination to improve my health. 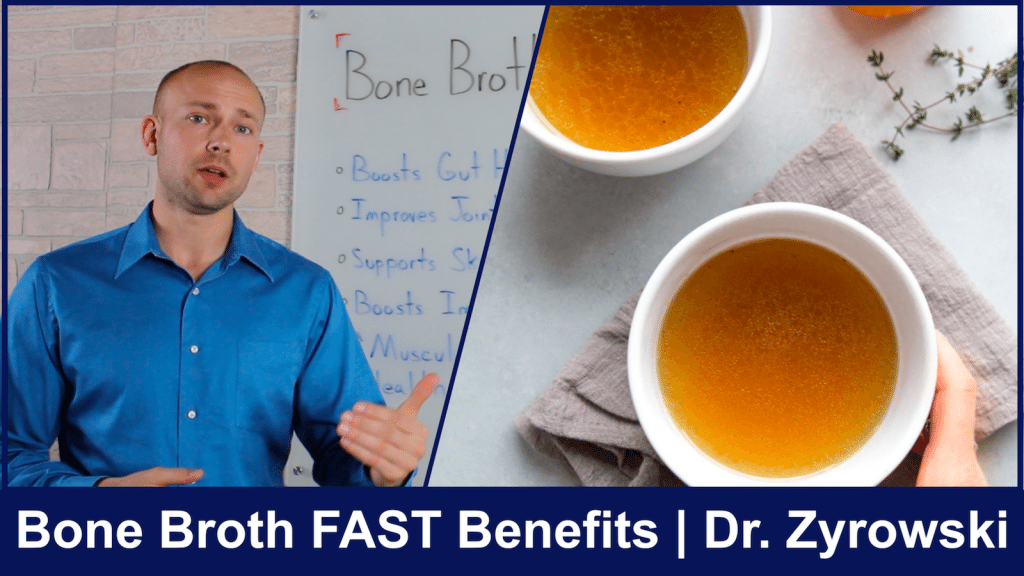 When I first started to doing bone broth fasts a few years ago, it was because I  was hit with bad eczema around my eyes. After a three day fast, where all I ate or drank was bone broth, it almost magically cleared up!

Bone broths are some of the most healthful foods you can put in your body. Not only are they delicious, they are also absolutely loaded with benefits that can help your gut, joints, skin, immune system, and bone health. The trick, of course, is to make your own bone broth. The store-bought soups just aren’t going to cut it here, you need the real thing. That means boiling the bones in a stock pot for at least 24 hours. It can take a little while, but the results are well worth it.

This powerful broth works to reset and heal the body.

When you fast from food and give your body a break from digesting food, your body is able to focus on the removal of toxins and healing.

Of course, when we think chicken bone broth, we insanely think about getting over a cold. But here is the big secret, it doesn’t need to be chicken. Beef bone broth will do the same thing, provided that it is made naturally and not sold in a box at the grocery store. All bone broths support your gut health, which also supports immune function, helping you get better when illness strikes.

Another major reasons to try a bone broth fast is because it will help support your musculoskeletal health. Minerals like calcium, magnesium, potassium can be found in abundance in bone broth. Glycosaminoglycans (G.A.G.) and Glucosamine both help support joint function, with G.A.G. supporting overall joint health while Glucosamine will help support cartilage. The levels of of collagen and Hyaluronic Acid in bone broth helps support skin health, minimizing wrinkles and skin elasticity. All in all, bone broth is one of the most potent anti-aging “treatments” out there today.

In this video, you’re going to discover the bone broth fast benefits.

Hi, I’m Dr. Zyrowski with Nuvisionexcel.com.  If you’re new to the channel, it is such a pleasure to have you here with us today. If you want to excel your health and your life, be sure to subscribe and hit the little bell notification and you’ll be well on your way.

Now, when we talk about bone broth, if you’re not familiar with what it is, it’s simply taking bones from chicken or beef, good organic grass fed sources, putting them into a pot with some distilled water and some apple cider vinegar boiling it for 24 to 48 hours and then there you have bone broth.

Bone broth has so many different healing benefits and it’s very, very beneficial to use it while fasting. Now traditionally fasting for a period of time with no food whatsoever. When we do a bone broth fast, we’re fasting from food, but we’re using a liquid food and that would be bone broth and we’re consuming it during that time in order to get the health benefits from bone broth.

Now as far as my story goes I told you before in another video that bone broth was really one of the first things I started utilizing on my journey to better health. Part of it was out of necessity, but also part of it was because I knew the benefits that it offered.

When I first started using bone broth the reason for it was because I had developed a really bad rash around my eyes. I had eczema really bad and I wasn’t sure why it happened. I didn’t know where it came from. And at the time I was a clinician, so you could imagine I was walking into the patients rooms and I had this rash around my eyes and I literally had people asking me if I got punched in the face. And so I was trying to hide it and cover it up. I was using all these different lotions and potions and I had used them for about a month and a half with no result. Finally I said, I’m going to do this bone broth fast thing. I’m going to try this out. So that’s what I did. I went and jumped on that fast and within 24 hours simply what happened is the Eczema was gone. This is how I discovered the bone broth fast benefits.

I had put so much effort into getting this eczema off my face for the past month and a half with no result. In a 24 hour period on a bone broth fast, completely gone. It was only about six months later, simply what happened is I developed a rash on my arm and I couldn’t get it to go away. And I knew right then, OK, let me try a couple of things and if it doesn’t go away, I’m going right into that bone broth fast. I did the bone broth fast again and it was gone.

If you didn’t know this, a lot of gut and gastrointestinal issues will actually manifest in very unhealthy skin, so through rashes and many other problems. The reason that bone broth fast is not only beneficial for having glowing skin, but it also is going to really help heal your gut.

Now, when we look to how to go about doing this, first of all, you’re going to take that bone broth and you’re going to drink it throughout the entire day for three to four day period. Now some people ask, well, how many cups and how much or how little? The truth is, is that you should drink as much as you want. You’re not going to over-consume.

Now, one of the things I really love about the bone broth fast is that it’s loaded with amino acids. And so when doing this fast, essentially what’s going to happen is going to allow your muscles to actually get those amino acids that are needed so that you’re not breaking it down.

If you follow me on Instagram, I’ve been talking a lot recently about how as a runner, I always have a problem with maintaining muscle mass. The great thing about the bone broth fast is, for someone like me who has a hard time maintaining muscle mass and I tend to just start wasting away muscle very easily, the bone broth fast is great because it actually loaded with amino acids. So over that fasting period, you’re going to find that you’re getting a sufficient amount of amino acids and you’re not gonna find that muscle wasting like you would if you were to just do a water fast for three to four days.

Now some people talk about the duration. How long do I do this? And the thing is, is when I do the bone broth fast, I typically will do it for like I’ve been saying the whole time of three to four day period. Now, let me explain now, four days is a lot of times where the magic happens. Clinically, a lot of great things happen on that fourth day. But the thing is, is that for most people it’s unreasonable to do it for four days.

And here’s why. So if you have to show up for work like I do on a Friday, one of the things is you start that fast on that Friday, then you aren’t going to have those energy stores to actually make it through the day. And then on Saturday,you’re going to be a little bit more fatigued but you have time to rest. While fasting you should always be taking time to rest and recover and just lay low. And then on the Sunday what happens is you also can rest, recover and lay low, and then you break that fast Sunday night. Then you’re going to jump into your work week again on Monday, most likely.

So the thing is is that it’s a very reasonable way to do it for people who have jobs because while fasting you’re going to be a little bit more fatigued, you’re going to be a little bit low on the energy scale. When you are having to show up in certain places and be there you’re going to have to make sure that you’re having the energy to perform. It’s never good to fast and have a very busy schedule and not be able to keep up with things. So while fasting we always want to remember that we should be resting. And so basically the three days very reasonable four days is great, but not too many people can do that in a reasonable way.

Now the next thing I want to mention about a bone broth fast is coming off of it, right? So here’s the thing is that when we’re fasting, we’re allowing our gut to recover, to cleanse. A lot of that bad bacteria is going to be dying off in there. A lot of great things are happening for our intestines.

Now, the other thing you want to do if you have a very sensitive gut, is you want to come off of that fast, very slowly, right? You don’t want to slam yourself with a big meal. Typically steamed vegetables are very great, and if you want to even take it further, what you can do is introduce foods very slowly.

So you really get an immune system reset. You did a hormone reset. You just did a complete reset for the body during this fast. So what you want to do from there is you want to introduce foods slowly if you’re someone who is very sensitive to different foods, but certainly, steamed vegetables are great and probiotic rich foods are great right in the beginning.

If you want to learn more about all the powerful bone broth fast benefits, be sure to check out my video on the health benefits of Bone-broth. Other than that, guys, this is once again a really powerful tool. It’s something that I use two to three times a year.

I really liked it because I’m not having that muscle wasting from traditional water fast and I’m still getting all the benefits. In my opinion, it kind of goes above and beyond to really help give you the right nutrients to heal your gut during that time. When I fast that’s always a priority for me is gut healing because so many people have damaged guts today.

And so until next time, folks, be sure to hit the little icon below and subscribe to my channel. Give the video a thumbs up and if you have any questions about the bone broth fast benefits or anything else, post them in the comments section below. That’s what we’re here for. We’re here to help you … post any questions down there and check out my other videos.  We have tons of great videos that are all a complimentary resource to you in order to skyrocket your health.

Until next time, make it a great day. I hope you found our bone broth fast benefits video very helpful.