As a clinician, I’ve found 6 alternative therapies to fight depression and have seen lives transform. That’s what I’m sharing with you today.

The World Health Organization states there are 350 million people suffering from depression, making depression the leading cause of disability. Some speculate that the increased demands from society (driving stress and overwhelm) is a major cause of the depression; others blame toxic overload and poor lifestyle.

If you have ever known someone with depression, then you know it is a very complicated topic. As you see the individual suffering, you offer support as you can but their infinitely complex and depressed mind doesn’t see a way out.

Treatment for depression can often times be as complicated and frightening as depression itself. I have seen the good and the bad and I want to offer some research-supported, holistic strategies to compliment you as you go through treatment and this healing journey. This is why I have decided to share my top six alternative therapies to fight depression. 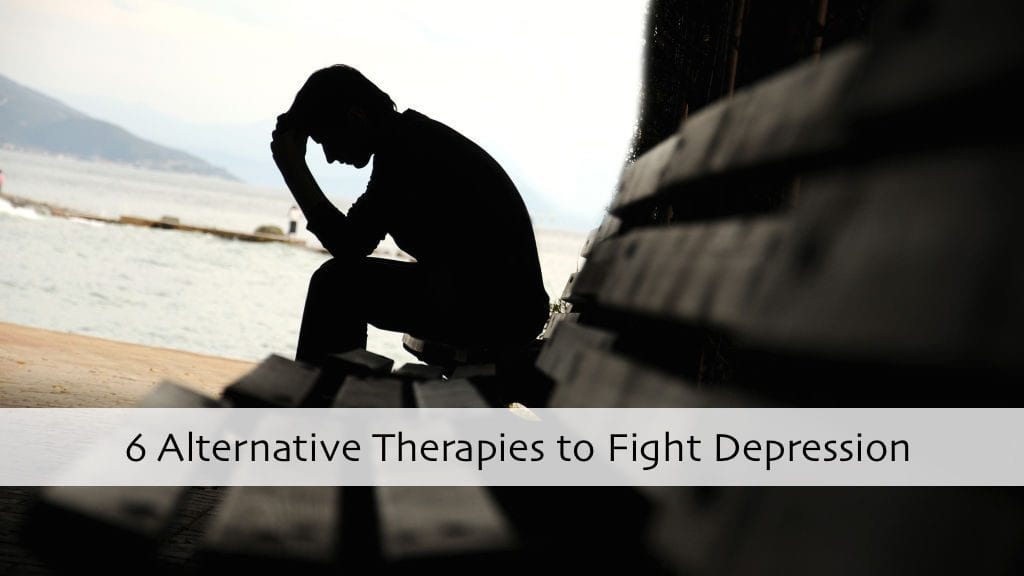 There are many physiological changes that occur in our brain when we exercise. As we exercise, feel good hormones are produced that can literally change our mindset. Exercise promotes the production of tryptophan, a precursor to serotonin. In return, serotonin is produced and utilized by the brain. Research has shown that serotonin levels are often low in those who are fighting depression. Through exercise, you can boost serotonin and dopamine levels.

A study in The Neuroscientist recently showed that aerobic exercise, through the release of brain derived neurotropic factor, can reduce depression. Exercise is a must for anyone fighting depression.

I’ve written in length about the positive effects that meditation has on our body. The Journal of Psychiatric Practice states that Mindfulness Meditation is one of the most effective forms to fight depression and anxiety. Though most forms of meditation would be very beneficial, it is mindfulness that is research supported at this point. Mindfulness mediation is also research supported to have long-term effects.
If you would like to learn mindful mediation as an alternative therapy to fight depression, then be sure to check out my how-to guide.

Practicing yoga can be very beneficial for those going through depression. The type of yoga I am discussing here is a calming form of workout that allows our mind to focus on the present moment. Though there is not overwhelming evidence, there are existing research studies that supports depression being suppressed with yoga.

Though many studies have supported that yoga has improved the life of those fighting depression, there is one study in particular I’d like to mention. In San Francisco, 38 adults were recruited for major depression, 20 of which were selected randomly for a 90 minute yoga session twice a week for eight weeks. The study concluded that the yoga participants had the greatest decline in depression and were more likely to achieve remission than those were did not utilize yoga.

There are so many natural supplements that can be used to fight depression. For the purpose of this article, I want to focus on the heavy hitters that are repeatedly found to support those fighting depression:

A) Fish Oil
Omega 3 fats are incredibly important for neurotransmitter function and balance in the brain. In Neuroscience Therapeutics, researchers performed 3 studies that included the use of omega 3 fatty acids and depression. The researchers concluded that omega 3’s had highly significant effects. One of the studies concluded a 50% reduction in depressive symptoms in just one month.

B) Vitamin D3
Though very much involved in seasonal depression, vitamin D3 can be involved in all forms of depression. In this study, vitamin D3 was found to be comparable to antidepressants, but without all the side effects.

C) B-Complex
B Vitamins support neuro-transmitter function (like serotonin), essentially supporting depression. It is also research proven that of B12 and folate (which support the methylation pathway) can play a large role in reducing depressive symptoms when levels are sufficient.

Dopamine is a naturally occurring neurotransmitter in the body that when at insufficient amounts can cause symptoms of depression.

Though this may sound redundant, you must follow the Heal Yourself Diet outlined in the cookbook. The diet is the greatest tool in your tool box when fighting depression and an important part of my alternative therapies to fight depression. It has been researched multiple times in many different ways and at the end of every study, we find that a good quality diet is a must in order to heal from any ailment.
To just mention an example, the British Journal of Psychiatry examined the link between depression and dietary patterns with 3,486 participants. Of the two groups, the first ate a diet similar to the one outline in the Heal Yourself Cookbook and the other group ate a diet with fried foods, grains, sugars and processed dairy. After five years the researchers concluded those on the high quality diet had lower odds of depression whereas the group on the poor quality diet had an increase in the risk of depression.

We can break this down further and look at foods that are found in the Heal Yourself Diet. We could identify research associated with each and every one of them if I was writing a book for you, but for the purpose of this blog I will simply mention the key takeaways that should be included to fight off depression.

Depression is difficult in all cases. Though many people are in search for that one tool that will be a game changer, I suggest utilizing all resources and strategies available for maximum results. I’ve assisted many people ward off depression utilizing holistic methods and the above alternative therapies to fight depression.

I hope this article can support you or someone you know fight depression and win!